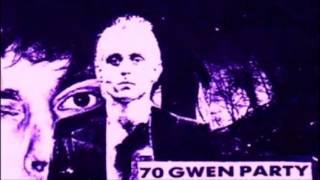 70 Gwen Party were an independent British band, made up of Victor N’Dip (guitar, vocals) and Lurgin Pin (bass, keyboards, vocals), who were known for their strong political views and sometimes spiky attitude. Active for a decade from 1988, they released four albums on their own Snape label, including a Peel sessions collection.

Peel was known as a strong supporter of 70 Gwen Party, although this wasn’t necessarily a mainstream position. In his 27 May 1995 (BFBS) show he commented:

“One of those ensembles, rather like Calvin Party, who nobody seems to like except me. They don't get any reviews in the music papers, or very, very rarely, and if they do they tend to be rather disparaging. And Victor, who's the kind of frontman for 70 Gwen Party, 50% of the ensemble really, is rather bitter about this actually, and goes on about it at considerable length, which I don't think does them any favours either.”

The band appear to have been grateful for Peel’s backing. In his sleevenotes to their Peel sessions CD, N’Dip wrote:

“70 GP have been among the lucky ones, without the support of the John Peel show (and various other BBC shows) this band in all probability would not exist. It’s as simple as that. … To end on a personal note: the John Peel show has been a massive inspiration for this band over the years, and we’re proud of the fact many of these recordings (nearly all tracks being re-written for or exclusive to the sessions) are amongst the best we ever made … so, from both of us, Thanks, John." [1]

Retrieved from "https://peel.fandom.com/wiki/70_Gwen_Party?oldid=225054"
Community content is available under CC-BY-SA unless otherwise noted.