(This page covers both Adam & The Ants and Adam Ant as a solo artist.) 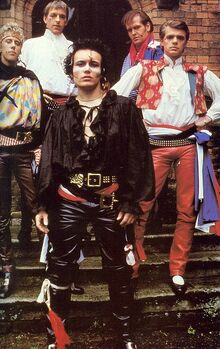 Adam & The Ants were a British rock band, active from 1977 to 1982, noted for their high camp and overtly sexualised stage performances and use of Burundi drums. One line-up of musicians left the band in January 1980 at the suggestion of then-de facto manager Malcolm McLaren, to form the instrumentalist personnel of Bow Wow Wow. The next incarnation of Adam & The Ants, featuring guitarist Marco Pirroni (previously of Rema-Rema) and drummer/record producer Chris Hughes, lasted from February 1980 to March 1982 and achieved major commercial success. A few months after disbanding the band, Adam Ant launched a solo career, retaining Pirroni as co-writer, and enjoyed immediate success with a third UK No. 1 hit single … (read more at Wikipedia.)

Adam & The Ants did three sessions for the Peel show before breaking through to a mainstream pop audience in autumn 1980. In the BBC radio documentary It's Alive, Peel producer John Walters recalled seeing the band for the first time and being impressed most by the vocal performance of their early female manager, Jordan, who sang one song ('Lou') during the set:

I’d seen the name and out of curiosity went to the Royal College of Art, [1] here they were doing a Saturday night dance. Not many people there, and Adam was, well, all right, but a bit art school for my taste. Suddenly Jordan came on – painted face, hair standing up about a foot in the air – and began to shriek. I thought, “Get that girl into the studio and let her shriek to the nation!”

In The Peel Sessions, Ken Garner relates how Walters went backstage after the first half to arrange the session date with Jordan, having previously met her at the Croydon Greyhound in October 1977 when Siouxsie & The Banshees and the Slits were on the bill, and the pair were locked in the dressing room when Adam inadvertently slammed the door shut as he went on stage (leading to innuendo along the lines of "oh, so that's how you get on the Peel Show".) [2]

Peel regularly played the band's early records, including three songs from their independent debut LP "Dirk Wears White Sox" on 27 November 1979, but featured only occasional tracks after they were signed by CBS, although both sides of the chart breakthrough 'Dog Eat Dog" single were played on release and earlier sessions were subsequently repeated. In 1987, Walters and Peel discussed Adam's success as a pop star in the fourth programme of the Peeling Back The Years series:

JW: When he moved onto the pirate makeup and filling very large halls with screaming girls and all that diddlee-qua-qua stuff…

JP: I liked the diddlee-qua-qua. I was always very keen on that.

JW: Well, I mean, he became a number one selling artist. Did you feel any resentment? Did you feel, “There’s another chap who has cashed in on being on this programme”?

JP: Really not at all, no. I mean, it’s one of those things that people always assume you do feel. … But just that you were in a position to give people who were doing work that you felt…

JW: Just give them some exposure.

The following list was compiled only from the database of this site, Lorcan's Tracklistings Archive and Ken Garner's Peel Sessions (pg219). Please add more information if known.

Retrieved from "https://peel.fandom.com/wiki/Adam_%26_The_Ants?oldid=271229"
Community content is available under CC-BY-SA unless otherwise noted.