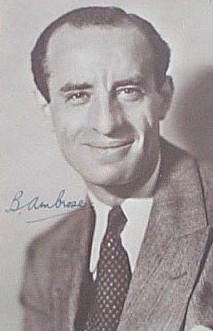 Bert Ambrose (1896--1971) holds the honour of being the artist to appear most frequently in the Pig's Big 78 feature of John Peel's later shows.

Ambrose led one of the best-known British dance bands of the 1920s and 1930s, usually referred to as Ambrose And His Orchestra. They became renowned during their residencies at London's Embassy Club and Mayfair Hotel, winning a prestigious audience including members of the Royal Family, making regular BBC radio broadcasts, recording prolifically and attracting some of the best musicians of the time, among them the Americans Sylvester Ahola and Danny Polo and Britain's Ted Heath, who was to become a star bandleader in the post-World War Two era. Ambrose's orchestra also featured a number of notable singers, including Sam Browne, Elsie Carlisle, Denny Dennis and the young Vera Lynn. Although Ambrose himself retired from performing in 1940, the orchestra continued to record until 1947.

Ambrose made a comeback in the 1950s, but with the big band era over and rock and roll about to explode, found himself struggling. Not only did he have to accept less prestigious engagements with smaller groups, but his penchant for gambling meant that very little of the money from his high-earning pre-war years remained. His management of the singer Kathy Kirby (1938-2011), whom he discovered as a teenager and recruited for his band, gave him a measure of success in the 1960s. (Kirby is best known to pop listeners for her 1964 hit version of "Secret Love", but a BBC radio feature on her suggested that Ambrose's management decisions had a negative effect on her career - and also that he gambled away most of her earnings). He died in 1971 but his music has been held in high esteem by successive generations of fans of British dance band music, and has been reissued in numerous CD collections.

Retrieved from "https://peel.fandom.com/wiki/Ambrose_%26_His_Orchestra?oldid=169327"
Community content is available under CC-BY-SA unless otherwise noted.