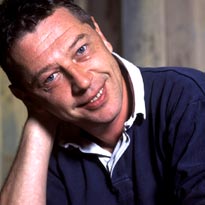 Andy Kershaw (1959- ) is a broadcaster on BBC Radios 1 and 3 from Rochdale in Lancashire. He is the brother of Liz Kershaw who has an illustrious radio career. She was also in a band called Dawn Chorus And The Blue Tits with Carol Vorderman. They did one session for Peel, apparently after Carol had had a relationship with Andy and musical differences with Liz.

His interest in music encompasses folk in all its forms, and this has led him to advocate world music in particular on his shows, which began on Radio 1 although he actually started his BBC career presenting the Old Grey Whistle Test. For a while he acted as Billy Bragg's chauffeur after becoming Entertainment Officer at Leeds University and booking the Clash and a return visit of the Who.

Andy Kershaw grew up in Rochdale, the Lancashire mill town where Peel was sent by his father in the late 1950s to learn the basics of the cotton trade. In his autobiography No Off Switch Kershaw says that much later he was surprised to learn that the mill where the young John Ravenscroft worked was "not a hundred yards from the nursery school I was attending at the time" (p.4). He goes on to describe how, as a teenage fan of Bob Dylan and Rory Gallagher, he discovered Peel's radio show in the mid-1970s ("an absolute revelation") and became a keen listener. He was attracted by the "juxtaposition of...styles" on Peel's shows, because it reflected his own musical tastes; "I had been listening to music in this manner at home for some time. The Peel programme's scattershot scheduling told me that this was perfectly OK. I wasn't odd at all. And I wasn't alone any more." (No Off Switch, pp 63-64)

Andy remembered attending a JP roadshow at Leeds University, although John's first memory was of being invited to stay at AK's flat and being greeted at 1 a.m. with twenty assorted musicians. [1] Originally, his shows were broadcast from Manchester from 06 July to 27 September 1985, when the show moved to London (replacing Tommy Vance's unsuccessful Into The Music) and Kershaw became a colleague of Peel's, sharing the same office in Broadcasting House, Egton 318, with JP and producer John Walters. Peel would constantly refer to him (affectionately) as either "brother Kershaw" or "the boy Kershaw" (the latter referring to their twenty-year age difference - as well as to Kershaw's grandfather who served in the Navy in World War 1 as an underage volunteer and was known as "Boy Kershaw"). Kershaw still speaks fondly of Peel and Walters and likens himself to Tigger, Walters to Pooh and Peel as a rather grumpy and disconsolate Eeyore. Both Ken Garner and Sheila suggest that the BBC may have been looking on him as a replacement for John, and Kershaw confirms this in his autobiography (pp.245-8). But this plan didn't work; their overlapping interests led them to become close friends and for a time their shows usually followed one another in the Radio 1 schedules. Andy was like a breath of fresh air - they had a "simultaeously epiphanic experience" on hearing the Bhundu Boys for the first time.

Kershaw described his shows as being "to a large extent, an amplification of those components I enjoyed most of the Peel programmes, when John relaxed for a few minutes and played, for example, some old blues or country record which he might introduce with a tale of his misadventures in the Texas of his late teens [sic]" (No Off Switch, p.234) - although he wasn't so keen on much of the new material Peel played in the 1980s and later, saying he "did not share John's apparent unquestioning faith in white rock music, which was particularly unshakeable if a band's records were released on an independent label ".(ibid, p.246) [2]

John referred to Kershaw as "a great but combative broadcaster", [3] as Andy seemed to relish the confrontations with management that Peel sought to avoid, and would stoutly resist changes to his programmes within the BBC (John also recalled having to break up a fight between AK and Simon Bates at a Christmas party). However, the sense of narrative in Peel's programmes was missing from Kershaw's: John interwove his family life and history with the music, whereas Andy's shows concentrated on the tracks themselves, with two or three continually segued together and uninterrupted by his comments: he didn't reveal much about himself. The show handovers eventually disintegrated into send-ups of 'matey DJ chat.' The pair shopped for African music at Stern's in Whitfield Street and went together on annual trips to the TT Races in the Isle Of Man until Sheila's near-fatal brain haemorrhage in 1996.

Another common feature was the presence of specially commissioned sessions: these have seen limited releases, and, while lacking the kudos of Peel's, encompass a wide variety of artists from many different countries, mainly African. However, it could be said that he scooped Peel in being the first to broadcast, among others, the Wedding Present in session, and admitting a number of artists such as Bruce Springsteen and Tom Waits that John disliked. One session by Papa Wemba was broadcast on both shows in 1992. He championed the Bhundu Boys and became a close personal friend to the band. He was also constantly finding new world music sounds for Peel, who would often thank him for sending him, for example, the latest release from Mongolian throat singers. He also played a great deal of country, blues and British and American folk. He lost his Radio 1 slot in 2000 and was bitter that Peel (possibly fearing for his own future on the station) remained silent rather than joining those who protested at his sacking. The following year saw him on Radio 3, which he came to regard as his spiritual home[4], becoming associated with Womad. He presented a tribute show shortly after John's death, and disappeared from the airwaves for some time following a traumatic and convoluted personal life and nervous breakdown, but reappeared in 2011 with a series of world music documentaries with Lucy Duran, Music Planet, again on Radio 3.

Like Peel, he has pursued a second career as a writer, contributing pieces to various newspapers including the Independent (notably an article in which he blamed the Radio 1 management for causing Peel's death by "marginalising" him) and producing an autobiography, No Off Switch, in 2011. He also showed a willingness to broadcast on other BBC radio channels, notably Radio 4, from an early stage in his career with the corporation, and was especially attracted to the role of a foreign correspondent. An enthusiastic world traveller, he was often attracted to dangerous or unlikely destinations, most memorably with an eye-witness report on the Rwandan genocide in 1994. He was a vocal and active campaigner against landmines. He also travelled to Haiti, North Korea, Angola, Mali, Zimbabwe and numerous other states. More recently he has done occasional spoken word programmes for Radio 4 and made occasional TV appearances on BBC1's primetime magazine, The One Show. He also makes personal appearances and does some live DJing, but seems uninterested in resuming his radio DJ career.

Radio plays by Peel of Kershaw session releases on the Strange Roots label, a Strange Fruit subsidiary set up by Andy Kershaw in 1994.[1].

Sits in for Peel

(List compiled from the Holidays page of this site. Please add further information if known.)

Peel sits in for Andy Kershaw

Retrieved from "https://peel.fandom.com/wiki/Andy_Kershaw?oldid=236869"
Community content is available under CC-BY-SA unless otherwise noted.