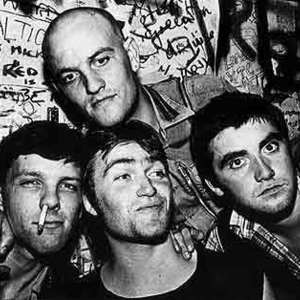 Angelic Upstarts are an English punk rock band formed in South Shields in 1977. Allmusic calls them "one of the period's most politically charged and thought-provoking groups". The band espoused an anti-fascist and socialist working class philosophy, and have been associated with the skinhead subculture.

The band released eight studio albums in their first decade. After a brief split they reformed in 1988, and a number of times subsequently, with new albums appearing in 1992, 2002, 2011, and 2016. More than two decades after its release, their debut single, "The Murder Of Liddle Towers", was included in Mojo magazine’s list of the best punk rock singles of all time.

The band's original members were Thomas Mensforth (Mensi) on vocals, Ray Cowie (Mond) on guitar, Steve Forsten on bass guitar, and Derek "Decca" Wade on drums. Keith Bell was the manager until 1980, when he was jailed for four and a half years for arson.

Mensi noted Peel's contribution to their success when discussing their debut The Murder Of Liddle Towers:

"We done a couple of shows and got the money together and we pressed 500 singles, and then Small Wonder/Rough Trade re-released it, and it got to number one in the indie charts. With no radio play. Apart from John Peel, nobody else played it, and it was actually banned off any sort of play list in the northeast. Fair play I say." [1]

The single was released in 1978 on the Dead Records label and then re-released on Rough Trade/Small Wonder: no plays have yet been recorded for it on Kat's Karavan. However, assuming Mensi's recollection is accurate, it doubtless led to their first session, which in turn led to their signing for Warner Bros, a company that came to punk late in the day. [1] The band achieved moderate success in the lower rungs of the UK charts, their most successful single being Teenage Warning (which, as John noted, was produced by Jimmy Pursey of Sham 69, as was their debut LP. The non-charting Different Strokes was produced by Dennis Bovell).

When the band's heyday was over, John ceased playing their material: by that time, their streetpunk sound had come to be associated with the undesirable face of the genre, something John was keen to distance himself from (despite the band's avowedly anti-fascist stance). The sessions finally saw the light of day in 2000.

Retrieved from "https://peel.fandom.com/wiki/Angelic_Upstarts?oldid=228745"
Community content is available under CC-BY-SA unless otherwise noted.