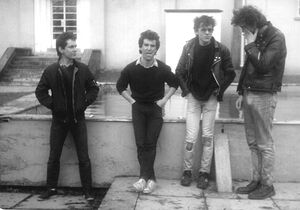 Yr Anhrefn, also known simply as Anhrefn, were an influential Welsh punk rock group of the 1980s and 1990s. Anhrefn (Welsh for "Disorder") formed in 1982, and initially sang only in Welsh. The band were not supported by Welsh language media, except for the S4C programme Fideo 9, and bassist Rhys Mwyn became known as an outspoken critic of the Welsh pop industry.  Mwyn (born Gareth Rhys Thomas) set up his own Recordiau Anhrefn label in 1983, helping to promote like-minded Welsh bands as well as their own music. The band played up to 300 gigs a year at their peak, and were featured on Channel 4 TV show The Tube in 1987, although they were largely ignored by the British music weeklies.  Original members Hefin Huws and Dewi Gwyn left the band in the late 1980s and were replaced by Dylan Hughes (formerly of Y Cyrff  and Sion Jones (formerly of Maffia Mr Huws). The band made their first English language recording in 1990, on a single with Pauline Murray, and also collaborated with Margi Clarke (they released a cover of Cole Porter's "Anything Goes" as a single).  In 1995 the band released Hen Wlad fy Mamau - Land of My Mothers, before splitting up. Super Furry Animals drummer Dafydd Ieuan was also in Yr Anhrefn for a time, playing on their 1993 Peel session.

In 1985, Rhys Mwyn, the bassist of Anhrefn put out a compilation album called Cam O'r Tywyllwch which featured Anhrefn, Datblygu, Cyrff, Tynal Tywyll and Elfyn Presli. As part of the 'promotion' he went to London with a plastic bag full of albums and spent the day going round NME, Sounds and other music weeklies and at the end of the day he went over to BBC Radio One to see John Peel. In an interview with Isaac Hunt, Rhys mentioned: [1]

"I was told that John was in a wine bar around the corner; as I entered the bar and caught Peel's eye he greeted me with 'You're not a mugger I hope,' which kind of says a lot about him. I explained about the compilation of new 'underground' Welsh-language acts and a couple of days later he played Rhywle Yn Moscow by Anhrefn, which at the time felt like we'd actually made it!"

The band were championed by Peel and recorded three sessions for his show; Peel even travelled to Wales to see the band perform.

Retrieved from "https://peel.fandom.com/wiki/Anhrefn?oldid=232280"
Community content is available under CC-BY-SA unless otherwise noted.