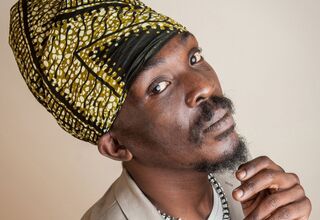 Keith Blair (born 31 March 1976), better known by the stage name Anthony B, is a Jamaican deejay and member of the Rastafari movement .Blair grew up in rural Clark's Town in the northwestern parish of Trelawny in Jamaica. His deeply religious family life (his mother was a Seventh-day Adventist and his grandmother a Revivalist) imbued him with a profound spirituality. During his youth, his favourite singers were reggae legends Bob Marley and Peter Tosh, musicians who strongly influenced his own style. Peter Tosh's influence can definitely be heard in Anthony B's vocal delivery and revolutionary stance.

While attending high school, Anthony B debuted as a deejay for the local sound system, Shaggy Hi-Power. In 1988, he befriended reggae artists such as Determine, Mega Banton, Ricky General and Terror Fabulous.

At this point in the reggae industry, singing "slack" songs about women was the popular thing to do. Anthony B did not believe in degrading women and chose to pen politically slanted songs instead. He collaborated with Little Devon and made his debut single "The Living is Hard" on the Wizard label in 1993. Anthony B tried many different producers before joining with Richard Bell, creating hits such as "Fire Pon Rome", "Raid Di Barn", "Rumour", and "Repentance Time". In late 1997, Anthony B released Universal Struggle, followed by a large number of albums since including 1999's Seven Seals, 2003's Street Knowledge, 2004's Untouchable which featured collaborations with artists including Wyclef Jean, Snoop Dogg & Bone Crusher, 2005's Black Star plus My Hope, and more recently, Life Over Death (2008)....(Read more)

Blair, in common with some of his Jamaican contemporaries, spoke out against attempts to accept black gay culture by the Terrence Higgins Trust in 2003: he said that the campaign was "as bad as putting crack on the streets, if not worse." [1] Despite the fact that JP disapproved of this stance, it did not stop him playing much of Blair's prodigious output (the singles alone have over 900 entries on Discogs).

Retrieved from "https://peel.fandom.com/wiki/Anthony_B?oldid=242433"
Community content is available under CC-BY-SA unless otherwise noted.