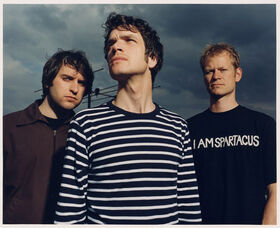 Appliance were a British experimental post-rock three piece. They released three 10" vinyl EPs on various independent record labels, including their own self-financed Surveillance Records, before signing with Daniel Miller's Mute Records in 1998. On the Mute label they released four studio albums; Manual (1999), Six Modular Pieces (2000), Imperial Metric (2001) and Are You Earthed? (2003). Their music was inspired by Krautrock, a 1970s Germanic experimental movement involving minimalist song structures, mantra-like rhythms and drones. Championed by John Peel, the band recorded four sessions during their career, and one in 2003 for Jeff Cooper's radio2XS. They toured live in Europe and the UK with, amongst others; Add N to X, Goldfrapp, Snow Patrol, Six By Seven, Hefner and Wire. The band have not performed or recorded since the Montreux Jazz Festival in 2003....(Read more)

"Appliance were James Brooks (Lou Reed-esque vocals/guitar), Michael Parker (bass), and David Ireland (drums). Accent is of course on ‘were’, since they split in 2003. James is following a career in art, and the other two are playing in bands called the Duds and the Nudists respectively. Hailing from Exeter, the original bassist was Stuart Christie, and they formed this Spacemen 3/Joy Division influenced combo after school in 1997. They laid down a few sessions for Peel, but only achieved one Festive Fifty entry, with the cantering slice of electronica known as Food Music (FF 1999 #44), which came from their debut album Manual: they were signed to Mute (from their own label Surveillance.com), which, given their rather obvious debt to Depeche Mode, is not surprising. Q Magazine less than enthusiastically called it ‘faux European road movie music in search of a Wim Wenders screenplay’. However, this is the kind of music that benefits from repeated listening, as its subtleties are not immediately obvious. Derivative, certainly, but what’s wrong with that? And they sent Peel a Christmas card. Nice." Teenage Kicks, Play On

Retrieved from "https://peel.fandom.com/wiki/Appliance?oldid=230740"
Community content is available under CC-BY-SA unless otherwise noted.