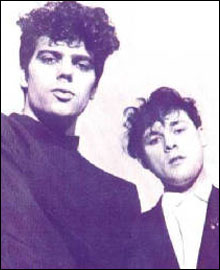 The Associates were a new wave duo founded in Dundee, Scotland in 1976 by Billy Mackenzie and Alan Rankine. Their debut single was a cover of David Bowie's Boys Keep Swinging, released in June 1979 just six weeks after Bowie's original. Their ploy worked: they secured a publishing deal with Bowie's publishers and a proper record deal. By 1980 they were touring with the Cure and signed to Fiction Records, for whom they recorded the LP The Affectionate Punch. At the turn of the year they relocated to Situation Two and put out a string of singles, later compiled on the album Fourth Drawer Down, recorded using money from major labels who were expecting demos to be produced with their money. In tandem with their increasing consumption of coke and speed, the groups' music became increasingly deranged and experimental. John Murphy and Mike Dempsey (ex-The Cure) became official members.

The Associates signed with WEA in 1982 and Martha Ladly joined as back-up singer. Billy and Alan immediately scored a string of UK top 20 chart hits, including Party Fears Two, which was used as the theme tune for Radio 4's satire show Week Ending. The album Sulk made the UK top 10, winning album of the year awards in the UK music press. However, the group's drug use was at a peak - Billy & Alan's behaviour was becoming somewhat erratic. On the eve of their biggest ever UK tour MacKenzie pulled out. A US deal with Island was consequentially lost. Deciding that he couldn't continue, Alan Rankine left the group. This proved disastrous for the band's career, as they were being courted by Seymour Stein of Sire Records who soon lost interest when Mackenzie refused to tour.

Mackenzie continued to write and record music under the name Associates until 1990. The albums Perhaps, The Glamour Chase (which the record company refused to release, considering it not commercially viable) and Wild and Lonely were made during this period. However, recordings were sporadic and subsequent Associates records failed to reach the charts in the UK and sold far fewer than their early albums.

In a Smash Hits interview [1] in 1982, both band members claimed that Peel was their favourite DJ, although Rankine wished he wouldn't play so much reggae. They recorded two sessions for Kat's Karavan, with MacKenzie recording a further one under his solo aegis. With the benefit of hindsight, Peel commented on the first on its release in 1989:

"It's a curious thing about these session reissues, because a lot of the ones which seemed dead radical now sound, you know, rather tiresome, really, and other ones which you assume, now, when you kind of look...People say, 'Well, the Associates, kind of tunes and things,' it actually sounds quite radical." [2]

Reflecting the zenith of their popularity, they achieved two entries in the yearly Festive Fifty chart of 1982, one of which, their top 10 chart hit Party Fears Two, Peel admitted to being glad to hear again. He retained an enduring liking for their debut LP The Affectionate Punch and played a track from it in tribute to MacKenzie following his suicide in 1997.

When Simon Raymonde came to select records from Peel's collection for his entry in the Record Box series, he chose the Associates single White Car, even though there is as yet no record of Peel having played it.

Retrieved from "https://peel.fandom.com/wiki/Associates?oldid=244165"
Community content is available under CC-BY-SA unless otherwise noted.