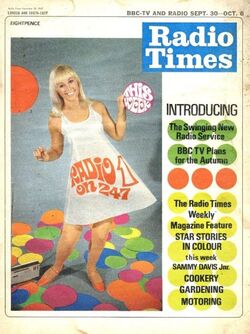 The BBC had a virtual monopoly on British radio from its creation in 1922 until the mid 1960s, and soon established a tradition of strictly limiting the dissemination of popular music that appealed to large audiences. In the 1950s and 1960s this was aimed at the music styles favoured by teenagers in particular, as rock'n'roll and pop were seen as a threat to order and the Corporation felt it had a duty to protect the status quo. From the 1930s on, challengers to the established system, such as Radio Luxembourg, attempted to breach the stranglehold the BBC had on broadcasts of popular music, but had to broadcast from abroad, as commercial British stations did not exist and the radio licence fee precluded any UK land-based competition. The signal faded badly after dark, which made for difficult listening. However, with the onset of pirate radio in the form of, among many others, Radio Caroline and Radio London, which broadcast from outside UK waters on ships, the flood of pop music produced in the 1960s finally found a voice in substantially better quality, with DJs who copied the style of those from the US, where commercial radio was the norm.

Threatened by this insurrection, the Government pushed through legislation to outlaw the pirates in the form of the Marine Offences Act, with the result that nearly all of them ceased broadcasting when the act became law on August 14 1967 (with the exception of Radio Caroline, which re-moored its ship off the Dutch coast and continued to broadcast as normal). The BBC responded to the listeners who had tired of many years of staid, safe programming by restructuring its three-tier radio channels. The Third Programme was renamed Radio 3 (classical and drama) and the Home Service was now Radio 4 (talks and documentaries), so in effect their programme content remained the same. However, the Light Programme, long a haven of easy listening entertainment, was split into two: Radio 1 (popular music) and Radio 2 (easy listening and comedy). The former of these debuted on Saturday 30 September 1967 at 7:00 a.m.: its first DJ was Tony Blackburn, who had previously worked on both Caroline and London, in common with many other of One's starting line-up: Keith Skues, Dave Cash, Kenny Everett and Simon Dee, for example (of the now outlawed pirates, only Johnnie Walker stayed with them as DJ, yet he too would eventually leave for the BBC).

BBC Radio 1 is still in existence to this day, having weathered many changes in music policy, budget cuts (initially, there was no increase in money from the licence fee to pay for it) and a variety of controllers who attempted to institute some radical changes, not always successfully. Though he frequently suffered schedule changes and was (at least to begin with) highly critical of the Corporation, Peel stayed in their employment for the remainder of his life, acknowledging that he could not move to commercial radio because they would not be able to do for him what the BBC were doing.

John Peel had been a comparative latecomer to Radio London: he had joined in early 1967, but unlike some of the station's other DJs such as Tony Blackburn and Keith Skues, who jumped ship when the BBC, already planning to launch their new pop service, offered them work, he remained with the station until its closedown on 14 August 1967, when the MOA became law. His sending a tape of the Perfumed Garden to Mark White, of the BBC's Gramophone department, when applying for work as redundancy loomed, came to nothing [1] , but he was interviewed at the Corporation (he mentions this in one of his earliest press interviews, in OZ 6) and was given a temporary post on Radio One solely due to the insistence of Bernie Andrews, who put him with anchorman Pete Drummond on a six-week contract as part of a rotating set of 'guest' DJs on the BBC's flagship "contemporary pop" programme, Top Gear. Andrews booked Peel for a further seven weeks (apparently after he heard murmurings in upper BBC echelons that JP ought not to be used again) and used the positive audience reaction to his advantage. From February 1968, John became the sole presenter, and it stayed that way for another seven years.

John was extremely partisan in his relationships with his fellow DJs at Radio 1. Of the ex-pirate DJs who joined Radio 1, he retained a lifelong affection for Keith Skues (who had been helpful to him in his early days on Radio London) and urged his listeners to tune in to Mike Raven's R & B show. Although his respect for Kenny Everett's talent declined as Everett moved into TV work, there was a lasting mutual admiration between Peel and Johnnie Walker, another ex-pirate. He also had amicable relationships with Terry Wogan and Bob Harris, but these did not last. Peel said he found the initially friendly Wogan increasingly distant, while Harris's cheating on his wife aroused Peel's ire and he refused to speak to his former Sounds Of The Seventies colleague for many years.

Among those he counted as personal friends were Paul Burnett, Andy Kershaw and David Jensen. His relationship with Tommy Vance was also cordial, even though the two were frequently in competition, and he revered Alan Freeman, citing him as the best DJ of all time. He had a grudging admiration for the showmanship of Jimmy Savile. However, those he disliked and made no secret of doing so were Noel Edmonds (who for Peel epitomised the kind of DJ whose main aim was showbiz fame), Simon Bates, Andy Peebles and Tony Blackburn (although he achieved something approaching a reconciliation with the last-named in later years). He warmed to Janice Long, one of Radio 1's few female DJs, and later was also close to Mary Anne Hobbs, who came to see him as a father figure.

Peel was sole presenter of Top Gear for seven years (1968-1975), during which time he garnered many awards for both himself and the show. It was a weekend fixture until 1971, after which it was incorporated in the Sounds of The Seventies strand and moved to the mid week. In the very last year, it was shifted to an unsuitable spot at tea time during the week as a result of financial difficulties at the Corporation. Ultimately, Kat's Karavan supplanted it, but John Walters, who started producing the show in 1969, carried on with JP until the early 1990s, overseeing many classic session recordings in the process.

Recording musicians in house for broadcast had long been a feature of BBC programming, but with Top Gear this assumed a new dimension. Artists were booked for a seven-hour period and the material was then spread over two programmes. This was known as the 'double session,' and was an invention of Bernie's. These recordings were used to bulk out airtime when the quota of records had been reached. [2] Peel's shows featured classic recordings from, among thousands of others, Captain Beefheart, Leonard Cohen and Tyrannosaurus Rex. They became known as Peel sessions, even though, self-effacing as he was, he typically disliked being seen as their progenitor. However, due to the BBC viewing these 'pop' recordings as ephemeral and not seeing their future potential, a great deal of early tapes were wiped and reused (something Peel would frequently bemoan in later years). Although Peel and John Walters would attempt to hide them, some appear to have been lost forever (e.g. the frequently requested Nick Drake session). Nonetheless, sessions would continue to be recorded until the end of John's shows and beyond, and many other programmes would also commission them.

With the cancellation of Top Gear, JP was given an hour-long show that was increased to two in 1977, reaching a peak of three hours in length during the early 1990s (and there were one-offs, usually Festive Fifty specials, that went on even longer). It is known on this site as The John Peel Show, although it had other appellations and in later years on the station, John would insist that if anything it should be called Kat's Karavan, since this was what he wrote at the head of every running order. The name harked back to his early years in America, as it was the first show he ever worked on. It lasted on Radio 1 from its inception in 1975 and died with him in 2004. Taking his earlier years into account, this totaled 37 years of unbroken service with the station, a record since broken only by his colleague Annie Nightingale (currently still on Radio 1 after 45 years).

Retrieved from "https://peel.fandom.com/wiki/BBC_Radio_One?oldid=106691"
Community content is available under CC-BY-SA unless otherwise noted.