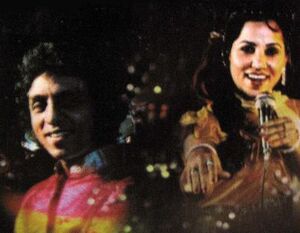 Babla & Kanchan were an Indian husband-wife musical group, originating from Bombay (now Mumbai) and best known for their work in the chutney music and Bhojpuri music genres. They performed together for forty years until Kanchan died in 2004. They were popular in Caribbean countries, where they covered soca music hits such as Arrow's Hot Hot Hot in the Hindi language and revived older hits by chutney singer Sundar Popo. Kanchan also had a solo career with albums, such as Kaise Bani, which were popular with the Bhojpuri audience. Her fame led to endorsement deals in India for brands including Johnson & Johnson.

The information comes from the database of this site and is incomplete. Please add further information if known.

Retrieved from "https://peel.fandom.com/wiki/Babla_%26_Kanchan?oldid=192339"
Community content is available under CC-BY-SA unless otherwise noted.