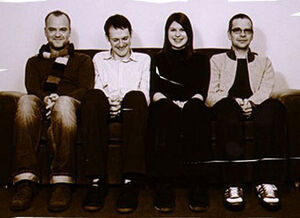 Ballboy (also spelled ballboy) were formed in Edinburgh in the late 1990s. They have recorded mainly for the label SL Records, to who they signed in 1997, but their most recent LP, I Worked On The Ships (2008) came out on the band's own Pony Proof Records. Gordon McIntyre has been the band's main force, originally on guitar and then moving on to vocals (original singer Viv Strachan left due to being uncomfortable performing live) and writing most of their material. It took them five years to release their first LP, A Guide For The Daylight Hours (2003): up till them they had released a series of EPs which were collected on Club Anthems (2001). Both Gordon and Katie Griffith (keyboards) are teachers: McIntyre explained in an interview for Vanity Project (2002) that I Hate Scotland, for example, "wasn’t really linked to a specific moment. I think it’s just something you see all the time living in Scotland. I guess teaching makes me spend lots of time thinking about the different relationships between parents and children, but I have a feeling that that lyric would have been written whether I taught or not."

They have been labelled 'the Scottish Wedding Present' and allmusic claims they have been "cloaked in the kind of hype, critical darling-hood and general preciousness which enveloped their Scottish forebears Belle & Sebastian several years earlier." [1] Their songs can also be poignant, as in their cover of Bruce Springsteen's Born In The USA: "few cover versions have approached the poignancy of (this), drawing out the pathos that was always there but too easily disguised by Bruce's  air-punching, anthemic treatment." [1] Nonetheless, their melodic style, firmly rooted in the music and social mores of their homeland, forged a style that evidently appealed to JP, who cited Olympic Cyclist as one of his favourite tracks from 2000. He first started playing them at the end of 1999 and they appeared in every Festive Fifty from 2000 to the end of Peel's run. Moreover, they recorded five sessions for the show, one live from Maida Vale and their last from Peel Acres: this contained a duet with Laura Cantrell on I Lost You, But I Found Country Music which so far has been the only one of their BBC recordings to see the light of day as a commercial release.

Gordon acknowledged John's influence on their career in 2002:

"John Peel allows thousands of people to hear music made without the guiding hand of the corporations. He is an outlet for music that people love, but would not get to hear otherwise. Without him we would have died, or become a faceless corporate band." [2]

Ballboy achieved the highest number of placing in the chart for both 2003 and 2004. In Mark Whitby's 2005 book The Festive Fifty, they are 23rd in his list of 'Top Festive Fifty Bands and Artists,' and he dubbed them "one of the genuine heavyweights of the Festive Fifty".

(Listener emails about the “decidedly average” NME review of ballboy album that week. JP: “But that’s a magazine that thinks Slipknot matters, do you know what I mean, so I shouldn’t pay too much attention to that.”)

(Peel asks ballboy to play ‘Hang Flags From Cranes’. Gordon McIntyre (ballboy): “If you request it, we’re not going to turn you down, are we?” JP: “No, well you can do. You can tell me to piss off. Many people have done that in the past and many more will, I think.” GM: “Not Scottish people.” JP: “No, that’s true.”)

"The Christmas special was our third or fourth (actually fifth) Peel session. We had played in Berlin a couple of days before and had bumpy flights both ways. We flew back into Stansted late at night and drove through the snow to a hotel near Peel Acres. The next day we drove through snowy countryside to the house where we met up with John and Sheila, their family and friends, Laura Cantrell and her husband and guitarist. We basically convened in John’s study/studio at one end of the house to the record the sessions, and moved along the hall to the front room to record the Christmas carols. It was an incredibly happy night, warm, friendly and filled with good food and drink. It is hard to describe it beyond that, but it was one of the best nights of my life." (Gordon McIntyre, Scared To Dance interview).

Retrieved from "https://peel.fandom.com/wiki/Ballboy?oldid=256206"
Community content is available under CC-BY-SA unless otherwise noted.