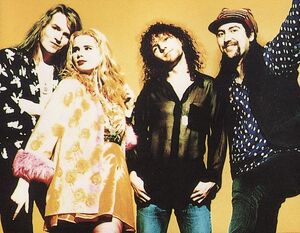 Bang Bang Machine were a British indie band from Evesham, Worcestershire. They formed in 1989 and experimented with different styles of music, for which reason the media found them hard to categorise. Musically they covered alternative rock, Goth, pop, ambient and dance. They were sometimes classed as a Shoegaze band. Their most well known song, "Geek Love", which entered at number one on the 1992 Festive Fifty was inspired by the book by Katherine Dunn about a family of freaks in a travelling circus. The artist David Hughes, who drew the Geek Love book cover, also illustrated the band's Eternal Happiness album cover. "Geek Love" also uses audio samples from the controversial Tod Browning film Freaks.  The band performed at gigs and also on Channel Four's television programme The Word. After going through different record companies, the band split in 1995.

"Geek Love" was championed by BBC Radio One DJ John Peel as a perfect example of a band self-financing their debut single; he famously stated:

"Even if they never made another record, they'll have achieved more than most of us do in our entire lives."

It was voted number one in his Festive Fifty in 1992. The band also recorded a Peel Session at Maida Vale 4 which was engineered and produced by Mike Robinson, but this has never been released commercially.

Retrieved from "https://peel.fandom.com/wiki/Bang_Bang_Machine?oldid=173515"
Community content is available under CC-BY-SA unless otherwise noted.