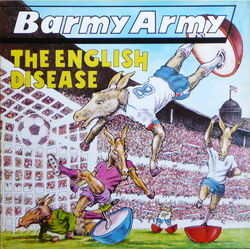 Barmy Army were a football-centered studio project of record producer and West Ham United fan Adrian Sherwood, aided by a shifting cast of musicians familiar to followers of his work with Tackhead and the On-U Sound label.[2]

Debut release 'Sharp As A Needle' set the Barny Army template, with crunching rhythms providing the backdrop for samples of terrace songs and match commentary. Originally worked on for a proposed Mark Stewart (& The Maffia) b-side, the track emerged in the wake of a football-themed Tackhead single, 'The Game'.[3]

The only Barmy Army album, "The English Disease", came out in late 1989, the year of the Hillsborough disaster. BBC Radio Lancashire DJ Steve Barker described the LP in the following terms:

"A passionately political sonic documentary where supporters from across the football spectrum joined together in a joyful celebration of the game whilst levelling a number of incisive jibes against the game's establishment, both at club and organisational levels."[4]

Little more was subsequently heard from Barmy Army, although the name resurfaced briefly in the run-up to the Euro 96 tournament for an On-U Sound collaboration with Primal Scream and Trainspotting writer Irvine Welsh, 'The Big Man & The Scream Team Meet The Barmy Army Uptown'.[5]

As a confirmed admirer of Adrian Sherwood and devoted Liverpool fan, Peel was predictably unable to resist Barmy Army’s 'Sharp As A Needle,' which not only sampled Anfield anthem You'll Never Walk Alone but also radio commentary of a goal by his all-time favourite player, Kenny Dalglish, who was pictured on the sleeve of the single.

In a 1988 Observer article, Peel declared it to be “the only football record of merit yet released.”[1]

Unsurprisingly, the DJ later selected the track as one of his four choices for the 1987 Peelenium. Back on 29 December 1987, when it placed #17 in 1987 Festive Fifty, he suggested he would have made it number one for the year.[2]

In The Ingerland Factor Playlist, published in 1999, Peel wrote:

“It doesn’t really get much better than this classic Barmy Army track. Incongruously, there is a West Ham reference – Sherwood is a Hammers fan – but the music relates otherwise to Kenny Dalglish, with a sideways nod to Ian Rush… Years after its release, I still can’t hear it without a lump in my throat.”

While Peel did play other Barmy Army tracks on his shows, 'Sharp As A Needle' remained an enduring favourite. It also came to feature in his live sets, including at the 2001 Sonar festival in Barcelona.[3]

Retrieved from "https://peel.fandom.com/wiki/Barmy_Army?oldid=254004"
Community content is available under CC-BY-SA unless otherwise noted.