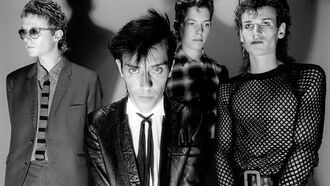 Bauhaus was an English post-punk band, formed in Northampton, England in 1978. The group consisted of Peter Murphy (vocals, occasional instruments), Daniel Ash (guitar), Kevin Haskins (drums) and David J (bass). Although they dropped the numerical portion within a year of formation, the band was originally named Bauhaus 1919, in reference to the first operating year of the art school Bauhaus. Generally considered one of the first gothic rock groups, Bauhaus were known for their gloomy sound and dark image. However, musically the band was quite diverse. Throughout their career, they incorporated a variety of genres, ranging from reggae to funk.

Bauhaus broke up in 1983. Peter Murphy began a solo career while Ash and Haskins continued as Tones on Tail and, later, reunited with David J to form Love and Rockets. Both enjoyed greater commercial success in the United States than Bauhaus had, but disappeared from the charts in their homeland. Bauhaus eventually reunited for a 1998 tour and again from 2005 to 2008.

Peel first saw Bauhaus perform on home turf in Harpole, Northants, at a John Peel Roadshow event in June 1979,[1], played their debut single 'Bela Lugosi's Dead' that autumn and invited the band to do a session for his show in December of the same year. Throughout the early years, Peel played many of the group's songs, but he was disappointed with their cover version of David Bowie's 'Ziggy Stardust', saying he "never fully understood the attractions of that" when the song featured at number 14 in the 1982 Festive Fifty. In 1990, revisiting early b-side 'Rose Garden Funeral Of Sores', he declared: "I can't believe I played that before, it's awful."

Retrieved from "https://peel.fandom.com/wiki/Bauhaus?oldid=242988"
Community content is available under CC-BY-SA unless otherwise noted.