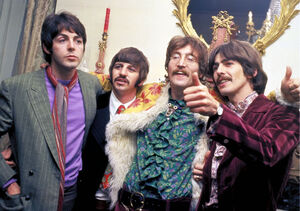 John Lennon (1940-1980), Paul McCartney (b.1942), Ringo Starr (b.1940) and George Harrison (1943-2001) were all born and brought up in Liverpool and were of the same generation as Peel. Yet their paths did not cross; Peel was born in 1939, was sent to boarding schools, was one of the last intake of National Servicemen, and moved to the USA in 1960. The Beatles were beginning their career at this time and remained little-known beyond Merseyside until their commercial breakthrough in 1963.

Peel's career was transformed by "Beatlemania" in the US, as by emphasising his Liverpool origins he was able to find work in radio as a "Beatles expert" on KLIF in Dallas. He later attended a Beatles Press Conference while working for KOMA in Oklahoma City.

On his return to Britain in 1967, the Beatles were at the height of their creativity, having just released the single "Penny Lane/Strawberry Fields Forever". They were revered by many, including Peel's Radio London colleague Kenny Everett, and were regarded as far ahead of their pop contemporaries. The release of Sgt. Pepper's Lonely Hearts Club Band in June 1967 intensified this adulation and drew even more critical acclaim. The LP was previewed on Radio London (reportedly its first play reduced Peel to tears) and became an essential part of the Perfumed Garden playlist; its atmosphere, a mixture of psychedelic strangeness and images drawn from everyday British life, was reflected in Peel's presentation style, alternately dreamy and down-to-earth. As a Liverpudlian, he sought to distance himself from the fashionable cliques of "Swinging London", hoping that his programme, its ethos expressed in the Beatles' song "All You Need Is Love", would appeal to a wider audience.

The Beatles were also involved with the London underground scene, whose newspaper International Times was supported financially by Paul McCartney, at the time a friend of IT editor Barry Miles. In a column Peel wrote for the paper in January 1968 there is a mysterious "Memo to J.L.",[1] which may hint at the friendship Peel developed with John Lennon (which he only revealed years after Lennon's death). Later, Lennon was a guest on Night Ride on 11 December 1968 and provided financial backing for a relaunch of IT in 1974, although by then Peel was no longer writing for the paper.

Throughout the late 1960s Peel retained his high opinion of the Beatles, playing their new records as they appeared, and after the band split up in 1970 he devoted most of a Disc and Music Echo column to a review of their film Let It Be, "for me, just about the saddest film I've ever seen"[2], saying "I love them like I love my brothers and my parents". In the early 1970s, their solo records featured in his playlists, but gradually his attitude towards the band began to change, perhaps because of their position in what was becoming an established canon of rock history - which, after the mid-1970s, began to be challenged. Much of their solo work was disappointing after the heights they had reached during their heyday as a band. In addition, as Peel got older he returned more and more to the key listening experiences of his youth, which had occurred in the 1950s when he discovered skiffle and early rock'roll. Despite the fact that he lived through the Beatle era, in his final years he saw Lonnie Donegan as a more important influence on his musical taste.

(The list below is compiled only from the database of this site and Lorcan's Tracklistings Archive and is far from complete. Please add further information if known.)

(The Beatles were probably the most covered of all artists on Peel's programmes; German band FSK even did a full session of Beatles covers. The list below was compiled from the Cover Versions page of this site and features only covers of original Beatles songs, NOT songs that the Beatles themselves covered. Please add further information if known.)

Retrieved from "https://peel.fandom.com/wiki/Beatles?oldid=232338"
Community content is available under CC-BY-SA unless otherwise noted.