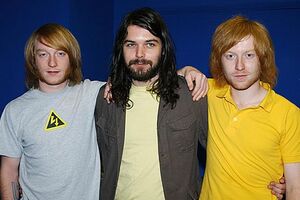 Biffy Clyro are a Scottish alternative rock band that formed in Kilmarnock, East Ayrshire in 1995, comprising Simon Neil (guitars, lead vocals), James Johnston (bass, vocals) and Ben Johnston (drums, vocals).  The band have released six studio albums, three of which, Puzzle, Only Revolutions and Opposites reached the top five in the UK Albums Chart. They also claimed their first number one album in the UK Albums Chart with their sixth studio album, Opposites, in 2013.  The band cite influences ranging from heavy metal luminaries like Metallica to prog rock legends Rush, while reviewers are often quick to link their sound to the likes of Nirvana and Foo Fighters - particularly in their use of shifting dynamics which they adapted from Pixies and Fugazi.

Biffy Clyro were regularly played on John Peel's show and did one session for him in 2004. Peel also had some of Biffy Clyro tracks as singles of the months between 2002 and 2004 in Peel's Record Box.

Retrieved from "https://peel.fandom.com/wiki/Biffy_Clyro?oldid=230879"
Community content is available under CC-BY-SA unless otherwise noted.