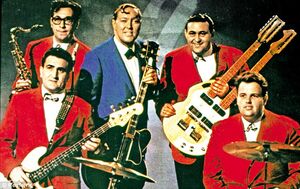 Bill Haley & His Comets was an American rock and roll band that was founded in 1952 and continued until Haley's death in 1981. The band, also known by the names Bill Haley and The Comets and Bill Haley's Comets (and variations thereof), was the earliest group of white musicians to bring rock and roll to the attention of white America and the rest of the world. From late 1954 to late 1956, the group placed nine singles in the Top 20, one of those a number one and three more in the Top Ten. Bandleader Bill Haley had previously been a country music performer; after recording a country and western-styled version of "Rocket 88", a rhythm and blues song, he changed musical direction to a new sound which came to be called rock and roll. Although several members of the Comets became famous, Bill Haley remained the star. With his spit curl and the band's matching plaid dinner jackets and energetic stage behavior, many fans consider them to be as revolutionary in their time as The Beatles or The Rolling Stones were a decade later. Following Haley's death, no fewer than six different groups have existed under the Comets name, all claiming (with varying degrees of authority) to be the official continuation of Haley's group. As of early 2008, three such groups were still performing in the United States and internationally.

In 1987 on Peeling Back The Years, John Walters asked Peel the following: [1]

Peel often would play Bill Haley And His Comets records on his show and he chose their 'Rock-A-Beatin' Boogie' track as his Peelenium 1955.

Retrieved from "https://peel.fandom.com/wiki/Bill_Haley_And_His_Comets?oldid=236000"
Community content is available under CC-BY-SA unless otherwise noted.