(This page covers both the Birthday Party and the band's previous incarnation as the Boys Next Door. See also Nick Cave & The Bad Seeds.) 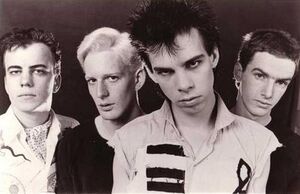 The Birthday Party (originally known as The Boys Next Door) were an Australian post-punk band, active from 1978 to 1983. In 1980, they moved from Melbourne to London. Disillusioned by their stay, the band's sound and live shows became increasingly violent. They broke up soon after relocating to West Berlin in 1983. Despite limited commercial success, The Birthday Party's influence has been far-reaching, and they have been called one of "the darkest and most challenging post-punk groups to emerge in the early '80s." In his lyrics, Nick Cave frequently used Old Testament imagery, combining "sacred and profane" themes. Their 1981 single "Release the Bats" was particularly influential on gothic rock, a tag which the band rejected. The creative core of The Birthday Party went on to acclaimed careers: singer and songwriter Nick Cave, multi-instrumentalist and songwriter Mick Harvey, and singer, songwriter and guitarist Rowland S. Howard....(read more at Wikipedia)

As with Joy Division, Peel found that many new bands he listened to either copied or were inspired by the Birthday Party, and while he lauded the intention warned that they had created a considerable benchmark to be surpassed. At one point he is said to have cited Phil Calvert as his favourite drummer. [1] He named Release The Bats as his single of the year in 1981 and chose it for that year's Peelenium.

The band recorded four Peel sessions over a period of two years. All featured previously recorded material apart from the last: they regarded this as the worst, with Nick Cave declaring that he was "really uninspired that day." [2] In the same interview, Howard added:

"When we went in to do that we were just - we had already recorded two of the songs, and we were just going through the motions of recording them again. It's very hard when you are doing a Peel session. You have extremely limited time, so you don't really have the time to approach songs from a new angle. It just has to be basically live, which is the way Sonny's Burning and Deep In The Woods were recorded on the EP. So it just felt dumb because we were just recording them exactly how we had done them before."

However, it would appear that most fans disagree with this, opining that the sessions replicated their live performances fairly accurately. [3] Nick's solo live set (TX 11 October 2001), part of a broadcast to honour Peel's purported 40 years on the radio, concluded with this tribute:

"I'd just really like to thank, on a personal note, John Peel, who helped the Birthday Party a lot when we arrived here. He was the only one who would go near us: he played us a lot, we did a lot of Peel Sessions with him, and thank you John."

(This list was compiled only from the database of this site and Lorcan's Tracklistings Archive. Please add more information if known.) While the band changed their name after the release of records under the name Boys Next Door, JP started to refer to them as The Birthday Party while playing these Boys Next Door records. They apparently changed their name to avoid confusion with a band called The Kids Next Door, of whom only a one hit wonder band from 1965 can be found on Discogs. Presumably there was another contemporary band of the same name