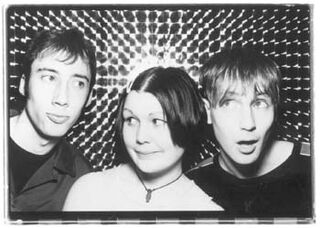 Bis are a Scottish indie pop band composed of Steven Clark (Sci-fi Steven), John Clark (John Disco), and Amanda MacKinnon (Manda Rin). The band's name, rhyming with 'this', derives from "Black Iron Skyline", a lyric from the song Twilight of a Champion by The The. Formed in 1994, the band broke up in 2003, but reformed briefly in 2007 for a series of concerts. The three musicians formed Bis in 1994, when Rin and Disco were in secondary school and Steven had recently finished there. About a year later, they appeared on Top Of The Pops performing "Kandy Pop" from their Secret Vampire Soundtrack EP ahead of its release: much being made at the time about them being the first 'unsigned' band to do so (in reality dozens of bands had appeared on the show with singles released on labels they had no formal contract with other than as a distributor or, like Bis, on a single by single basis). The band's early releases were on Glasgow's Chemikal Underground label, run by The Delgados, before transferring to Wiiija, where labelmates included Cornershop. (Read more at Wikipedia.)

In a 1997 interview, John Disco cited Peel as an example of someone whose age was less important than his musical perspective:

"He's done what he's wanted to do throughout his life. He's 54 or something, [1] and even though he still listens to some of the stuff that he liked when he was eighteen, he also likes to listen to drum-and-bass stuff. Some people don't like him because they don't think he should still be a youth icon--because he's that old. But I don't think people should criticize him for that. I think they should compliment him." [1]

Retrieved from "https://peel.fandom.com/wiki/Bis?oldid=255360"
Community content is available under CC-BY-SA unless otherwise noted.