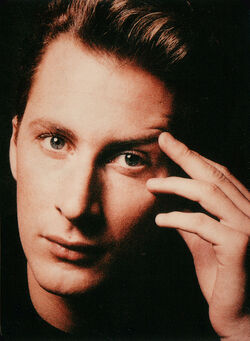 Black (born Colin Vearncombe; 26 May 1962 − 26 January 2016) was an English singer-songwriter from Liverpool, who enjoyed mainstream success in the late 1980s. William Ruhlmann of AllMusic described Vearncombe as a "smoky-voiced singer/songwriter, whose sophisticated jazz-pop songs and dramatic vocal delivery place him somewhere between Bryan Ferry and Morrissey."...Colin met Pete Wylie and befriended David Dix, who became his musical partner In 1982 Black (the name of the band as well as Vearncombe's alter ego) played with the Thompson Twins on their "Quick Step and Side Kick" tour and also supported Wah! on a UK tour. The live sound of synth/percussion/guitar and the use of reel-to-reel tapes got them noticed.

After splitting with Dix, 1985 was a gloomy year for Vearncombe, causing him to write the ironically entitled minor key song "Wonderful Life". At first released independently through Ugly Man Records, the track got Black noticed by A&M Records who signed Vearncombe and launched his international career. At first, the single "Everything's Coming Up Roses" flopped, but the follow-up, "Sweetest Smile" became a UK top-10 hit. The third single, a re-release of "Wonderful Life", was a massive hit worldwide. The album of the same name, released in 1987, had similar success, reaping commercial and critical acclaim.

On 12 January 2016, he was involved in a serious car accident in Ireland and placed in a medically-induced coma after sustaining serious head injuries. Vearncombe died from his injuries at the intensive care unit of Cork University Hospital on 26 January 2016 at the age of 53.

Black's debut release was Human Features on Vox in 1981: on playing it, Peel commented, "They used to be called something else, actually, and I was reading in Mersey Sound that they were called something else, and I've been feverishly trying to find what it was that they were called." [1] [1] Black recorded two sessions for Kat's Karavan: they reveal a little of the worldweary side of Vearncombe that he would later mine to such success, but also an undercurrent of quirky humour. It may have been the broadcasts of these that brought him to the notice of WEA who signed (and dropped) him in the following year.

Retrieved from "https://peel.fandom.com/wiki/Black?oldid=234689"
Community content is available under CC-BY-SA unless otherwise noted.