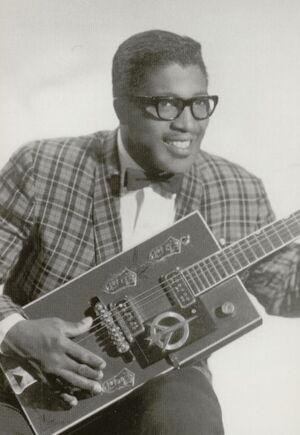 Ellas Otha Bates (December 30, 1928 – June 2, 2008), known by his stage name Bo Diddley, was an American rock & blues vocalist, guitarist and songwriter (usually as Ellas McDaniel). He was also known as The Originator because of his key role in the transition from the blues to rock, influencing a host of acts, including Buddy Holly, Jimi Hendrix, The Rolling Stones, Pink Floyd, The Velvet Underground, The Who, The Yardbirds, The Jesus and Mary Chain, Eric Clapton, Elvis Presley, and The Beatles, among others. He introduced more insistent, driving rhythms and a hard-edged electric guitar sound on a wide-ranging catalog of songs, along with African rhythms and a signature beat (a simple five-accent clave rhythm) that remains a cornerstone of rock and pop. Accordingly, he was inducted into the Rock and Roll Hall of Fame and received Lifetime Achievement Awards from the Rhythm and Blues Foundation and a Grammy Award from the National Academy of Recording Arts and Sciences. He was known in particular for his technical innovations, including his trademark rectangular guitar. (Read more at Wikipedia.)

In 1997, Bo Diddley was one of four artists chosen by Peel to write about in a Sunday newspaper article as important musical influences (others included The Fall).[1]

Peel was a fan of traditional urban blues music and especially of those artists he called "the wild men of the blues", including the likes of Muddy Waters and Howlin' Wolf, but the DJ described the effect of hearing Bo Diddley and others on Kat's Karavan while driving in his car in America in the early 1960s as "galvanising" (Margrave Of The Marshes, p189, Corgi, 2005). An LP by the musician was one of the first four albums Peel bought while living in Dallas.[2]. He later admitted regretting that he never saw Bo Diddley live in his prime.[3]