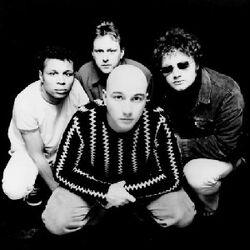 The Boo Radleys were an English indie band who were associated with the shoegazing and Britpop movements. They were formed in Wallasey, Merseyside, England in 1988, with Rob Harrison on drums, singer/guitarist Sice Rowbottom, guitarist/songwriter Martin Carr, bassist Timothy Brown. Their name is taken from the character Boo Radley in Harper Lee's 1960 novel, To Kill a Mockingbird.  Shortly after the release of their first album, Hewitt replaced Rob Harrison on drums and he was in turn replaced by Rob Cieka. The band split up in 1999. In their decade long career, the band could only generate one UK top ten single; the 1995 single "Wake Up Boo!", which charted at number nine.

The band caught the attention of John Peel when they released their first album Ichobod and I in 1990 on a small label called Action Records. They were quickly signed up by Rough Trade, which subsequently collapsed, and the band found a home at Creation Records in the early 90s. Peel was an avid fan of their music when they started out as a shoegazing outfit, but he was less keen on their output in the mid-90s, when they were producing Britpop material, and did not play Wake Up Boo!, the band's big hit. After three sessions and four festive fifty entries in their early years, he rarely gave airtime to their later releases.

Following the breakup of the Boo Radleys, Peel played early tracks from Martin Carr's solo project Brave Captain, who would record one session for the programme.

"Alone Again Or" from #2 and "Boo Faith" from #3 were released on LP Learning To Walk (Rough Trade), though the liner notes mistakenly credit both as coming from the 7 April session.