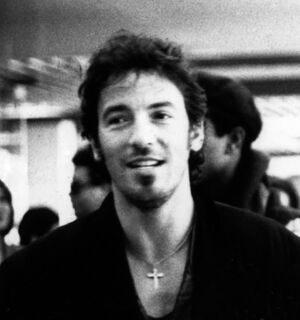 Bruce Frederick Joseph Springsteen (born September 23, 1949) is an American musician and singer-songwriter. He is best known for his work with the E Street Band. Nicknamed "The Boss", Springsteen is widely known for his brand of heartland rock, poetic lyrics, Americana sentiments centered on his native New Jersey and his lengthy and energetic stage performances, with concerts from the 1970s to the present decade running up to an uninterrupted 250 minutes in length.  Springsteen's recordings have included both commercially accessible rock albums and more somber folk-oriented works. His most successful studio albums, Born in the U.S.A. and Born to Run, showcase a talent for finding grandeur in the struggles of daily American life; he has sold more than 64 million albums in the United States making him the fifteenth highest selling artist of all-time and more than 120 million albums worldwide.

On 18 November 1975, exactly six months before he fell in love with the Ramones, Peel attended a gig by the up and coming Bruce Springsteen and wrote in The Listener:

"His first few numbers were a trifle theatrical, like off cuts from West Side Story... Don't think he is, as Rolling Stone have claimed, the future of rock 'n' roll, but rather a summary of its past. Vocally Van Morrisonish  and I thought he rather overdid the street punk routine."

After that gig, he almost never played any of Springsteen's material on his show and scarcely missed an opportunity to compare him unfavourably with other artists such as Half Man Half Biscuit. However, in June 1978, he played six tracks from Springsteen's new release Darkness On The Edge Of Town, although this was probably out of a sense of duty to include such music prior to the Friday Rock Show's debut. His listeners also voted Born To Run at number 26 on the 1978 Festive Fifty. Notwithstanding Peel's antipathy towards his output, he did play covers of Springsteen songs, in particular ones by Dawn Chorus & The Blue Tits in 1985 and ballboy in 2003, whose cover of Born In The USA  reached number 38 in the 2003 Festive Fifty. Where Springsteen was concerned he had a friendly rivalry with his colleague Andy Kershaw, who had a feeling for Springsteen's music that Peel did not: in 1999, the artist recorded a session for Kershaw's Radio 1 show.

In 1987, JP stated that he felt Wild Man Fischer would be "a more than adequate stand-in for Bruce Springsteen" and could not understand the attraction of his music:

"It utterly mystifies me. I can’t see it at all. I mean, when he first started out, as everybody said at the time as I recall, it sounded to me like sub-Dylan stuff. And it just doesn’t ring true. In the same way as I can’t really describe what it is I find attractive about the things I do find attractive, I really don’t know what it is I don’t like about Bruce Springsteen. It just doesn’t ring true to me. I suppose that’s what it boils down to." (Peeling Back The Years 6 (Transcript))

(The following list is compiled only from the database of this site and is likely to be incomplete. Please add further information if known.)

Retrieved from "https://peel.fandom.com/wiki/Bruce_Springsteen?oldid=196316"
Community content is available under CC-BY-SA unless otherwise noted.