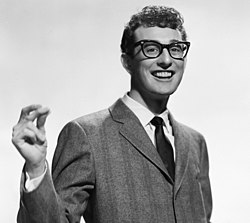 Charles Hardin Holley (September 7, 1936 – February 3, 1959), known as Buddy Holly, was an American musician, singer-songwriter and record producer who was a central and pioneering figure of mid-1950s rock and roll. He was born in Lubbock, Texas, to a musical family during the Great Depression, and learned to play guitar and sing alongside his siblings. His style was influenced by gospel music, country music, and rhythm and blues acts, and he performed in Lubbock with his friends from high school. He made his first appearance on local television in 1952, and the following year he formed the group "Buddy and Bob" with his friend Bob Montgomery. In 1955, after opening for Elvis Presley, he decided to pursue a career in music. He opened for Presley three times that year; his band's style shifted from country and western to entirely rock and roll[...]. In early 1959, he assembled a new band[ ....], and embarked on a tour of the midwestern U.S. After a show in Clear Lake, Iowa, he chartered an airplane to travel to his next show, in Moorhead, Minnesota. Soon after takeoff, the plane crashed, killing Holly, Ritchie Valens, The Big Bopper, and pilot Roger Peterson in a tragedy later referred to by Don McLean as "The Day the Music Died".

During his short career, Holly wrote, recorded, and produced his own material. He is often regarded as the artist who defined the traditional rock-and-roll lineup of two guitars, bass, and drums. He was a major influence on later popular music artists, including Bob Dylan, The Beatles, The Rolling Stones, Eric Clapton, Weezer, and Elton John. He was among the first artists inducted into the Rock and Roll Hall of Fame, in 1986. Rolling Stone magazine ranked him number 13 in its list of "100 Greatest Artists".

The mild-mannered Buddy Holly may have lacked the "wild man" persona of Peel's favourite artists of the rock and roll era (Gene Vincent, Jerry Lee Lewis and Elvis Presley), but he was just as important an influence on the pop music of later decades, as can be seen not only by the number of plays of Holly's own material in Peel's playlists, but also by cover versions of his work by numerous artists, some of them unexpected (Steeleye Span, Blind Faith, the Grateful Dead).

There was a revival of interest in Holly's work in the late 1960s and early 1970s, not only because of the rock and roll revival which occurred in those years and led to essays on Holly appearing in Rolling Stone and similar publications. Don McLean's 1971 hit "American Pie" told the story of how Holly's death affected music fans; Peel played the song before it topped the charts and became one of the biggest radio hits of its era, but doesn't seem to have returned to it later. He was also critical of some cover versions of Buddy Holly songs, particularly those by Linda Ronstadt, whom he attacked in a column in The Listener at the end of 1977 (reprinted in The Olivetti Chronicles, pp. 183-4) : " a young woman whose assets are a face of cloying sweetness and a voice of the type reviewers describe as "achingly pure". Her speciality is butchering defenceless Buddy Holly songs". Despite this, her version of "That'll Be The Day" was heard on a 1978 Peel show, albeit when Paul Gambaccini was sititng in for JP (see below).

Characteristically, Peel's favourite Buddy Holly song wasn't one of the singer's best-known hits, but "An Empty Cup (And A Broken Date)", which he chose for the Peelenium 1957.

Retrieved from "https://peel.fandom.com/wiki/Buddy_Holly?oldid=232825"
Community content is available under CC-BY-SA unless otherwise noted.