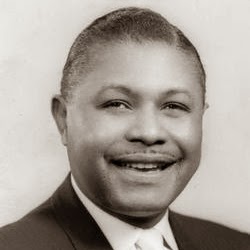 Clarence LaVaughn Franklin (often billed as Bishop C. L. Franklin, Reverend C. L. Franklin) (January 22, 1915 – July 27, 1984), was an African-American Baptist preacher, a civil rights activist, and father of soul and gospel singers Aretha Franklin and her sister Erma Franklin. Known as the man with The Million-Dollar Voice, he served as the pastor of New Bethel Baptist Church in Detroit, Michigan, from 1946 until 1979. (Read more at Wikipedia.)

"The first time I heard one of his sermons was when I was driving in the middle of the night, out of my head on pills I have to say through Illinois, and it came on the radio. And in that instant I could have believed in almost anything actually that he'd tried to persuade me to believe." (05 June 2003)

Peel frequently expressed his admiration for the sermons of CL Franklin, as well as his desire to play a recording of a full one on air. On 16 February 1981, he claimed to have a particular favourite in mind:

"I've always meant to play it on the radio but it's about 18 minutes long. I think if I did play it people would think that I've gone quite mad... one of these days I'll crack completely and play it for you, you wait and see."

Almost two decades later, on 15 February 2000, Peel was still vowing to play a full Franklin sermon at some point, “because they are fairly awe-inspiring.”

Further details became clear on his 18 April 2001 show, when Peel said that when he eventually got the elbow from Radio One, the last thing he planned to broadcast was the full 18-minute version of Franklin’s sermon on the text Dry Bones In The Valley, a promise earlier made on 09 January 1993.

In fact, Peel never fulfilled his long-standing wish to play this particular recording in full and he restricted himself to airing relatively short extracts of the preacher’s sermons.

“I was telling Adam out of Themselves that he ought to get into this gospel stuff, and he’s going to go back to the States – well, to Canada, actually, tomorrow – but he’s going to go back and try and find some of the LPs that the Reverend CL Franklin made. You should have at least one in your collection.”

On 07 September 2004, John mentions having received a gift of one of the Reverend's records for his recent 65th birthday from Billy Bragg.

Peel also played tracks by the reverend's daughters Aretha Franklin and Erma Franklin on his show.

Retrieved from "https://peel.fandom.com/wiki/CL_Franklin?oldid=232010"
Community content is available under CC-BY-SA unless otherwise noted.