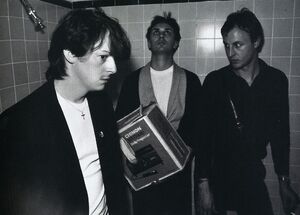 Cabaret Voltaire were a British industrial / electronic music group from Sheffield, England formed in 1973. Initially composed of Stephen Mallinder, Richard H. Kirk, and Chris Watson, the group was named after Cabaret Voltaire, a nightclub in Zürich, Switzerland, that was a centre for the early Dada movement. Their earliest performances were Dada-influenced performance art, but Cabaret Voltaire later developed into one of the most prolific and important groups to blend pop with dance music, techno, dub, house and experimental electronic music.

The band experimented widely with sound creation and processing. They eventually turned to live performance, often sharing the bill with Joy Division. In one incident, Mallinder was hospitalised with a chipped backbone after the band had objects thrown at them. However, the arrival of punk rock brought a more accepting audience for their industrial and electronic sound.

Peel discovered the group in 1978, when the Rough Trade record label sent him their first single, Extended Play, which he liked very much. The DJ continued playing their material over many decades and invited the band twice for sessions. In 1987, the Code LP featured longstanding Peel favourites Adrian Sherwood (producer) and Bill Nelson (guitar).[1]

In addition to Cabs releases, Peel also gave generous airtime to 12" "bleep techno" singles made by Richard H. Kirk with Sweet Exorcist, released by fledgling Sheffield label Warp Records, as well as other solo works and collaborations. The year before his death, the DJ played and included in his April 2003 (Peel's Record Box) Kirk's "Man From Basra" remix of the Cabs' "Yashar".[2]

In 2012, 12 Cabaret Voltaire LPs were among the first 100 albums by artists beginning with C when details of Peel’s record collection were initially released via TheSpace website (see Record Collection: C). Unsurprisingly, the band were also selected as the subjects of a related video, "C is for... Cabaret Voltaire". In an interview with the John Peel Centre, Stephen Mallinder expressed appreciation for Peel's support for the group and for playing different genres, including reggae and dub, that weren't heard anywhere else on the radio.

Retrieved from "https://peel.fandom.com/wiki/Cabaret_Voltaire?oldid=248811"
Community content is available under CC-BY-SA unless otherwise noted.