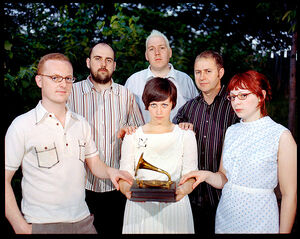 Camera Obscura (Latin; camera for "vaulted chamber/room", obscura for "dark") are a Scottish indie band from Glasgow. The band were formed in 1996 by Tracyanne Campbell, John Henderson, and Gavin Dunbar. Several other members performed with the band before David Skirving joined as a permanent guitarist. The band's line-up changed in 2000 and 2001 when Lee Thompson joined as its permanent drummer, Lindsay Boyd joined as a keyboard player, and Skirving left and was replaced by Kenny McKeeve. The band have been compared musically to Belle And Sebastian, whose singer Stuart Murdoch, produced Camera Obscura's debut album Biggest Bluest Hi-Fi in 2001. The band still continues to play and their last album Desire Lines was released in 2013. (Read more on Wikipedia)

The band did five sessions for Peel's show, including three from Peel Acres. In an interview with Pitchfork in 2006, Tracyanne Campbell, the singer was asked about John Peel and how influential he was. The following questions and answers came from Pitchfork's site: [1]

None of their sessions are commercially available.

Retrieved from "https://peel.fandom.com/wiki/Camera_Obscura?oldid=230590"
Community content is available under CC-BY-SA unless otherwise noted.