Camille Howard (1914-1993) was an R&B pianist and singer from Galveston, Texas. She learned her craft at an early age and was a member of a group called the Cotton Tavern Trio for five years. In her teens, she moved to southern California in search of work, and joined Roy Milton in firstly the Roy Milton Trio, which expanded to the Solid Senders after having a big 1945 hit with The R.M Blues. This became a bestseller when reissued on the Juke Box label (later to become Specialty and which would be renowned as Little Richard's home label). 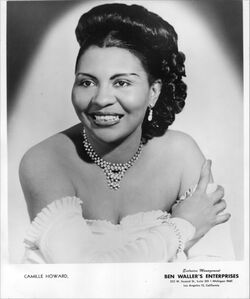 Her style, fast and complex boogie-woogie with dexterous fingerwork and irresistible drive, was first showcased on the track Camille's Boogie, and the single Big Fat Mama / Thrill Me (the latter a vocal number) persuaded Specialty president Art Rupe to allow her to record under her own name, and after X-Temperaneous Boogie, improvised on the spot as the last item in a December 1947 recording session, made her arguably a bigger draw than the band she was with, she went solo, cutting the track she is now probably best remembered for, Fireball Boogie (which Peel would subsequently name as one of his favourite records of all time). In addition, she was fond of updating classical themes to the new style (Song Of India Boogie is a reworking of Rimksy-Korsakov).

She spent the early 50s performing with a host of legendary names including Jimmie Witherspoon, Johnny Ace, Willie Mae Thornton, Joe Tex and Little Willie John. Her decision to leave Specialty in 1953, on the eve of the explosion of rock'n'roll, and sign for Federal, resulted in lower sales but a profile that was still high enough for her to found her own nighclub in Los Angeles (although she left the label shortly afterwards). She made her final recordings for Vee-Jay in 1956. In a twist of irony, the music she presaged, rock'n'roll, would end her career (although her strong religious faith was also a contributory factor), and in later life she was reticent about her career in boogie-woogie.

It is doubly ironic that Peel only discovered her music a few months before her death at the age of almost 79, and in fact initially presumed that she was either dead or extremely elderly. He was immediately struck by the energy inherent in her recordings, and programmed a track a day into his legendary stint in Jakki Brambles' lunchtime spot in April 1993. Additionally, he contrasted another discovery, Conlon Nancarrow, with her by playing the two back to back. In view of this enthusiasm, it is somewhat odd that none of her music was selected for inclusion in the Peelenium, as it contained elements that would drive the early history of rock'n'roll.

Retrieved from "https://peel.fandom.com/wiki/Camille_Howard?oldid=228456"
Community content is available under CC-BY-SA unless otherwise noted.