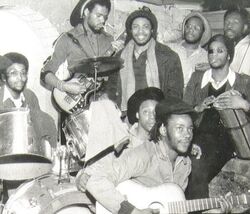 Peel was a huge fan of the band’s debut single, "Smoking My Ganja", which he claimed to be “the best British record of the year” in November 1978.[1] The session that soon followed was later repeated among the best sessions for 1979.[2] The 12” double-header "UK Skank / Run, Run, Run" was equally enthusiastically received, described by Peel as “really ridiculously good”[2], while the Headline News LP also enjoyed repeated plays on his show.

After 1980, however, Peel seemed to lose track of Capital Letters, and currently available tracklistings suggest that he failed to air anything from 1983’s Vineyard LP. In 2002, responding to a listener request to play "Smoking My Ganja", he noted that the single had "disappeared into the BBC Record Library in 1979 (and) this is the first time that it's been out, which I think is really sad."[3]

Retrieved from "https://peel.fandom.com/wiki/Capital_Letters?oldid=120367"
Community content is available under CC-BY-SA unless otherwise noted.