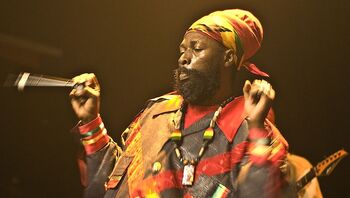 Capleton (born Clifton George Bailey III, 13 April 1967, Saint Mary, Jamaica) is a Jamaican reggae and dancehall artist. He is also referred to as King Shango, King David, The Fireman and The Prophet. His record label is called David House Productions. He is known for his Rastafari movement views expressed in his songs. (Read more at Wikipedia.)

Peel nominated Capleton's single, Lock It Down for March and April 2002 as one of his singles of the months.

(The list below was compiled from the database of this site and Lorcan's Tracklistings Archive. Please add more information if known/)