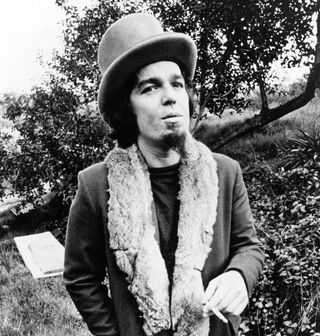 “If there has ever been such a thing as a genius in the history of pop music, it’s Beefheart.” – John Peel [1]

Captain Beefheart was the stage name of Don Van Vliet (15 Jan 1941-17 Dec 2010), who was active between 1965 and 1982 with a constantly changing lineup of musicians called The Magic Band. After 12 studio albums, Van Vliet withdrew from the music scene to follow a successful career as an artist.

Despite missing out on commercial success, Beefheart enjoys a continuing reputation as a musical innovator and major influence on successive generations of alternative rock musicians.

John Peel first encountered Captain Beefheart & His Magic Band when working as a DJ for KMEN in California in 1966. After rescuing the combo’s first single from the rejects bin, he successfully pushed for its elevation to the station’s playlist.[3] Peel later recalled:

”It had everything that I really wanted from a record. It had a kind of rhythm and blues root and yet was sung by this bloke with this for the time perfectly extraordinary voice.” [4]

But the musical love affair truly blossomed when the DJ was subsequently invited by the record company to see the band support Them at the Whisky A Go Go on Sunset Strip:

”I remember Beefheart and the band being really quite exceptional in a shambolic way and doing something which I’ve never heard anyone else doing before. It was blues-based, but they attempted these long rambling interpretations of Howlin’ Wolf tunes and stuff like that. I was sold straight away.”[5]

Beefheart and band were mentioned in the British music press as early as May 1966, when Derek Taylor's "Hollywood Calling!" column in Disc & Music Echo had a paragraph on the band, describing them as "tough, solid men from the desert, rugged-jawed with black beatnik hair"[3] (at the time Taylor was doing publicity for them). But they remained little-known and their early singles weren't released in the UK.

After returning to the UK in early 1967, Peel obtained a copy of the band's Safe As Milk LP in July of that year and championed them on his Perfumed Garden show on Radio London, and then on Top Gear after joining the BBC. He succeeded in dodging Musicians Union restrictions on US performers to broadcast two sessions from them in 1968. That same year, as well as introducing Beefheart and company at their first-ever British gig at Middle Earth, his support went as far as acting as driver for the band's first UK tour. Thanks to regular airplay on Peel's shows, the Safe As Milk LP became a best-seller in the the London record shops which carried US imports (notably One Stop Records[4]), yet it was not released in the UK until many months later. Peel was aware that Beefheart did not enjoy the critical acclaim afforded to other American bands he played on his shows, such as Love, Jefferson Airplane, or the Doors. In issue 33 of International Times (14 June 1968), Peel wrote:

"A lot of people, friends, have, with trepidation, admitted that they don't see what I see in the Magic Band and their profound leader. I have searched around the murky shadows of the Peelian mind and don't really have a convincing answer. All I know is that there is no other group I've heard that has such power and the ability to communicate it to me. That's all."

After Beefheart's 1968 visit, Peel devoted most of his International Times column of 04 November 1968 to a review of the Strictly Personal LP:

"This is such good stuff. I weep for those who don't know it. Chris Welch [of Melody Maker] said the Magic Band were the worst group he'd ever seen play - I'll say they're the best....Leave your pre-conceived notions of what a group should sound like in the comfort of your own acreage."

However, Trout Mask Replica and its successors were more positively received in the music press, and Beefheart began to be more widely appreciated in the UK (and even in the US, where he made the cover of Rolling Stone magazine in 1970) as a genuine original, although he was never a mainstream success. Peel remained loyal, even when the Captain briefly attempted a more commercial approach in the early 1970s. While relations between Peel and Van Vliet remained good, with the DJ receiving regular phone calls from the singer into the 21st century, the Englishman always seemed somewhat in awe of the Captain. Returning to London from a celebrated gig at Frank Freeman's Dancing School, Beefhart asked Peel to pull over to the roadside so he could "listen to a tree":

“He might have said ‘listen to a tree’ because it rhymed with ‘having a pee’. [But] his thought processes were not like those of other men – you could well believe that he wanted to listen to a tree. If anybody else had said it, I would have said ‘stupid bastard’ under my breath. But with Beefheart you thought, well, he knows more than I do and if he wants to listen to a tree, and I’m in a position to enable him to do so, then I’m going to give him a chance to do it, because it would be quite wrong not to. So he got out of the car and disappeared."[6]

Unlike many of Peel's other musical enthusiasms from his earlier years, Beefheart remained a constant feature of the DJ's shows until the end, helping to cement the legacy of Van Vliet among fresh generations of musicians. In 1987, Peel commented:

"In every programme that I do even now, although I don’t necessarily play Beefheart records, I can hear him. Five, six, seven, eight records in each programme echoes of Beefheart."[7]

On 07 July 2004, with Van Vliet himself long retired from the music scene, a reformed Magic Band played a live Peel session at Maida Vale.[8]

Two sessions. No known commercial release. Original session tapes were lost and 2001 repeat broadcasts came from a listener tape from the original shows.