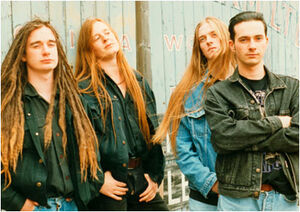 Carcass were formed in Liverpool in 1985 and were originally known as Disattack. The founder and most constant member was Bill Steer, later of Napalm Death, and Jeff Walker (Electro Hippies) later joined on bass. They recorded their debut, Reek Of Putrefaction, in just four days and it was released after having been subjected to less than perfect production in July 1988. The band were unhappy with the result, but when it came to Peel's attention, he featured it heavily and declared it to be his favourite LP of 1988.

Putrefaction established the Carcass template of growled or gurgled lyrics to a brutal grindcore backdrop. The titles (and the controversial cover of the LP) revelled in medically explicit detail (e.g. Vomited Anal Tract, Fermenting Innards and Regurgitation Of Giblets), but resulted in two Peel sessions, which came towards the end of JP's fascination with the genre. The band continued to progress, and their second LP Symphonies Of Sickness saw the adoption of longer songs, more structure and eventually a move toward melody, as evinced by Heartwork (1993), credited with establishing melodic death metal as a genre. The band signed to Columbia Records but disintegrated during the much-delayed final album, Swansong, which was released nearly a year late and on their original label, Earache.

Retrieved from "https://peel.fandom.com/wiki/Carcass?oldid=234126"
Community content is available under CC-BY-SA unless otherwise noted.