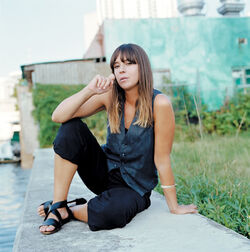 Charlyn Marie Marshall (born Jan. 21, 1972), also known as Chan Marshall or by her stage name Cat Power, is an American singer-songwriter, musician and occasional actress and model. Cat Power was originally the name of Marshall's first band, but has come to refer to her musical projects with various backing bands.

Marshall was discovered opening for Liz Phair in 1994 by Steve Shelley of Sonic Youth and Tim Foljahn of Two Dollar Guitar, with whom she recorded her first two albums, Dear Sir (1995) and Myra Lee (1996), on the same day in 1994. In 1996, she signed with Matador Records, and released a third album of new material with Shelley and Foljahn, What Would the Community Think. Following this she released the critically acclaimed Moon Pix (1998), recorded with members of the Dirty Three, and The Covers Record (2000), a collection of sparsely recorded cover songs.

After a brief hiatus she reemerged in 2003 with You Are Free, featuring guest musicians Dave Grohl and Eddie Vedder, followed by the soul-influenced The Greatest (2006), recorded with numerous Memphis studio musicians, and a second covers album, Jukebox (2008). In 2012 she released the self-produced Sun, which opened at number 10 on the Billboard 200, the highest charting album of her career to date. (Read more at Wikipedia.)

Cat Power – aka Chan Marshall – first heard the Go-Go's, took up the drums, decided not to go back to finish high school and moved to New York. Releases on tiny labels followed, as did her first for Matador, which was called What Would The Community Think. The critically acclaimed Moon Pix was released in 1998 and featured Jim White and Mick Turner from the Dirty Three. Her latest LP is an album of covers called The Covers Record. This is her debut session, which is also made up of cover versions.
(John Peel, 20 July 2000)

Three sessions, including one at Peel Acres. No known commercial release.

(The following list is compiled only from the database of this site and Lorcan's Tracklistings Archive. Please add more information if known.)

Retrieved from "https://peel.fandom.com/wiki/Cat_Power?oldid=230974"
Community content is available under CC-BY-SA unless otherwise noted.