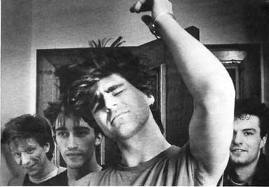 The Chameleons (known as The Chameleons UK in the U.S.) are an English post-punk band, formed in Middleton, Greater Manchester in 1981. The band originally consisted of singer and bassist Mark Burgess, guitarist Reg Smithies, guitarist Dave Fielding and drummer John Lever (replacing original drummer Brian Schofield). The core quartet were sometimes augmented live by keyboardists Alistair Lewthwaite and Andy Clegg in the 1980s, and percussionist-vocalist Kwasi Asante during their reunion period (ex-Magazine drummer Martin Jackson also briefly replaced Lever during 1982–83 while the latter was on sabbatical). After splitting up in 1987, the band reformed in 2000 before splitting again in 2003. Singer Mark Burgess currently performs songs from their back catalogue under the name Chameleons Vox.

According to Sheila Ravenscroft in Margrave Of The Marshes (p388), David Fielding of the Chameleons waited outside Broadcasting House to give his band's demo tape to Peel:

"For some, like Kevin Shields of My Bloody Valentine or David Fielding of The Chameleons, that meant loitering outside Broadcasting House in order to press their tape directly into John’s paw. In the case of The Chameleons, John thought he was the victim of a practical joke after listening to their demo: the recording was so accomplished that he suspected he had been given a cassette of an established band...."

In a blog comment, however, Mark Burgess, the band's singer, stated that he was with David Fielding when they gave a demo tape to Peel in 1981, and that this was in fact their second tape, after an earlier one they sent to the DJ had no drums.[1] Peel had received the first demo but found the sound muffled and sent a note to the band:

Dear Mark Dave Reg, Here with your tape back. Very muffled, but it sounded at though something worthwhile was going on. Forgive brevity but I've over 1,000 cassettes to hear. This is true! If you do another let me hear it. John Peel [2]

After listening to the second demo, Peel was surprised by the high quality of the recording and invited the band in for a first session, which led quickly to a publishing deal with Virgin. [3]

When Peel started playing tracks from their first LP in 1983 he opined that it was too lon and thought the title of the album  was a bad sign...

Retrieved from "https://peel.fandom.com/wiki/Chameleons?oldid=239612"
Community content is available under CC-BY-SA unless otherwise noted.