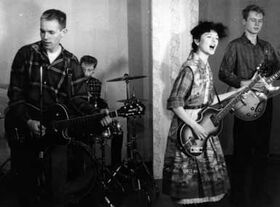 The Chefs were a late Seventies / early Eighties band from Brighton, fronted by Helen McCory (aka Helen McCookerybook). Some cite the band as inventing what became known as the 'C86' indiepop sound.

(The list below was compiled only from the database of this site and may be incomplete. Please add further information if known.)

"Mine's bigger than yours. Those are the Chefs and that's called Boasting from their EP on Attrix Records from Brighton and Robin Miller in Sounds has a bit of a dig at me for liking the EP because there's a track on it about the popular disease thrush. I'll remember you Robbie."

Retrieved from "https://peel.fandom.com/wiki/Chefs?oldid=223627"
Community content is available under CC-BY-SA unless otherwise noted.