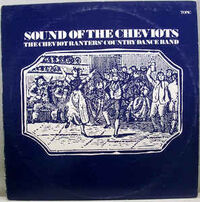 The Cheviot Ranters, also known as the Cheviot Ranters Country Dance Band, were a famous Northumberland dance band operating in the Alnwick area from about 1953 to 1996. They were described by their record label, Topic, as "the most distinguished and authentic of English country dance bands from England’s North-East" and are best remembered outside their local area for the three LPs they recorded for the label in the early 1970s.

Peel obtained a copy of Sound Of The Cheviots, the band's first LP (credited to the Cheviot Ranters' Country Dance Band, although after that they shortened their name) and was enthusiastic enough to play it on the air, and to the audience at the 1972 "Great Western Express" rock festival, at which he was compere and DJ (with colleague Jerry Floyd). According to his comments on the 03 June 1972 (Radio Luxembourg) the Ranters' exuberant dance music got a more positive response than anything else he played at the event.

It was clear that, quite apart from their music, the Cheviot Ranters had a special appeal to Peel at a time when he was becoming increasingly weary of the tendency of "superstar" rock musicians to isolate themselves from their audiences - something which he saw, and was critical of, at festivals like the Great Western Express. On the Radio Luxembourg show mentioned above he read out the sleevenotes of the LP, which list the band members and point out that they all had regular day jobs and played music for enjoyment rather than as a way of achieving fame or fortune. This may explain why, after doing two sessions for Peel and recording two more LPs for Topic, they returned to playing for local audiences. However, they influenced another Northumbrian music band, the High Level Ranters, who also recorded Peel sessions. Peel retained enough affection for their music to revisit their records in later decades, and when Topic reissued Sound Of The Cheviots as a CD and digital download, the band were described as "darlings of the late John Peel on his early 1970s’ BBC radio shows."[1] The DJ also included a track by them on his 2002 compilation FabricLive.07, as one of the favourite records he liked to include in his live DJ sets.

Retrieved from "https://peel.fandom.com/wiki/Cheviot_Ranters?oldid=229888"
Community content is available under CC-BY-SA unless otherwise noted.