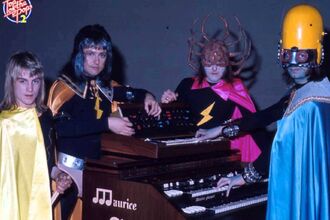 Chicory Tip are an English pop group formed in 1967 in Maidstone, Kent and still exist with two of the original members today. They were originally known as The Sonics. The first few singles flopped, although "Excuse Me Baby" (a remake of a minor UK hit for The Magic Lanterns in 1971) secured the band its first appearance on Top Of The Pops. The group's finest moment came after their producer and manager Roger Easterby came across an advance copy of "Son of My Father", a song written by Giorgio Moroder and Pete Bellotte—Bellotte wrote English lyrics for Michael Holm's self-penned hit "Nachts Scheint Die Sonne" (which he sang) but Moroder wrote the music on the original as confirmed on the sheet music for the song. Convinced of its potential, he secured the option to rush record the group's own cover version in competition with the original. The result was a number one hit in the UK Singles Chart for three weeks in February 1972. It was one of the first hit singles to feature a Moog synthesizer, which in this case was programmed and played by studio engineer and record producer Chris Thomas. A different account was given by Chicory Tip's Rick Foster, who stated in an interview that the Moog was played by the musician who joined them on Top Of The Pops, whose name he could not remember. The single sold over one million copies by July 1972, and was awarded a gold disc....(Read more)

The only time John is known to have played any of the band's material on BBC Radio One was pursuant to his stint as a compere at the 1992 Reading Festival: he aired Son Of My Father and noted that it was "the record which seemed to get people dancing most at this year's Reading Festival. I played it immediately after the ABBA copyists had been on, so perhaps it's not entirely unconnected. It's always nice when you put records on and see people jumping about in the mud, and this was that record." He also admitted, "Never thought I'd play that on the radio." [1]

Although neither Chicory Tip nor any of its members appeared on Peel's show in session, it is worth noting that vocalist Peter Hewson recorded the single Take My Hand with Vince Clarke in 1983: the latter had already recorded for Kat's Karavan with Yazoo.

Retrieved from "https://peel.fandom.com/wiki/Chicory_Tip?oldid=229522"
Community content is available under CC-BY-SA unless otherwise noted.