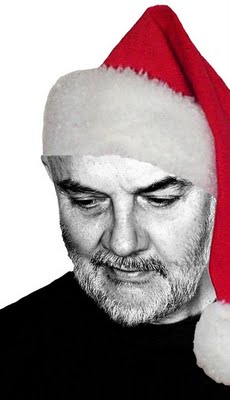 JP began to play Christmas records in his normal programming sometimes as early as November, but also on occasion displayed a begrudging attitude to Christmas in particular that bordered on active dislike. Nonetheless, the festive programmes are among the most cherished and fondly remembered of his output, despite the fact that he studiously avoided discussion of religion and appears to have been non-denominational (although his public funeral was held at Bury St Edmunds Cathedral). A recently shared clip of John's appearance on the Simon Mayo slot The Big Holy One seems to confirm this, as JP describes himself as 'a heathen fundamentalist'.

Doubtless in order to draw audiences in to his shows at a time when listening figures competed aggressively with those for TV, Peel and Walters instituted an annual chart of the listener's favourite tracks (1976-1982 and 2000: all-time charts, 1983-2004: yearly charts) in 1976. Despite threats to discontinue it (and one year, 1991, in which this actually happened), a couple of blips (1977 was Peel's own choice, and 1997 saw only a top 31) and frequent grumbles about its conservatism in failing to accurately reflect Peel's diverse playlists (usually accompanied by the phrase 'white boys with guitars'), it continued annually to his death and even beyond. It was traditionally broadcast in blocks of anything between ten shows to only one, starting as early as 15 December and finishing around New Year (the All-Time chart of 2000 surpassed even this by extending over the whole month of January). Regardless of its name, only the years 1984, 1985, 1993, 2001 and 2003 saw any part of the chart transmitted on Christmas Day itself. All the charts and detailed tracklistings can be accessed from Festive Fifty: An Introduction.

Peel And The Season

"There is always a great air of melancholy about Christmas. Perhaps this is because the modern holiday symbolizes everything that has gone wrong over the past 2,000 years...As every mail brings me printed Christmas greetings from record companies, corporations, music-publishers, plumbers and the like, I miss the Christmases that have developed in my memory." (International Times, December 13-31 1968. Full article.)

"The Mighty Pig and I had one of our best Christmases ever. We seem, in some miraculous way, to have landed in one of the nicest villages in the British Isles....On Christmas Eve the pub closed at ten thirty and thirty or more of the customers came down to our cottage to see in Christmas Day. We talked and drank until after four o'clock and during that time there wasn't a voice raised in anger, no-one became obnoxiously drunk, not a single glass was broken nor were there any cigarettes trampled on the floor. Small things, yes...but the sort of small things that make this a lovely place to be." (Margrave Of The Marshes, Bantam Press, 2005, p. 324-5, taken from an article written by Peel in January 1973.)

"We have to swallow our pride and go...to record company Christmas boozeramas. These take several horrid forms, but it is the prinicple of these things that you arrive-even if you arrive at dawn-several hours after everyone save the employees of the company has left. In consequence, your arrival interferes with a number of long delayed and elephantine courtships between promotion youths and overstimulated secretaries liberated by gin. Conversation is entered into only with the object of getting you off the premises as quickly as possible, and drinks are mixed with the same motive and in such immoderate measures that it is clear the amorous youths are prepared to risk hospitalising you to clear the way for their ugly wooing." (Sounds, 10 January 1976, reprinted in The Olivetti Chronicles, Bantam Press, 2008, p. 286-7.)

"I've been feeling sort of mildly fed up this evening, what with one thing and another. It's that kind of pre-Christmas 'triste'. Shopping was the main reason for it. I spent about five hours shopping this afternoon, achieved nothing, and you go round thinking, "Why am I doing this? Why am I feeling kind of social pressure to go round looking for stuff that people don't want, to give them on this particular day? Why not wait until they do want something and give it to them then?" Of course, quite clearly, this is not the way things go." (23 December 1987 show.)

"I'm one of those people, I have to admit, who really dislikes the whole Christmas period, mainly because it's the time of the year at which we become incredibly sentimental about children, and the old, and also the homeless by and large, whereas the rest of the year round, of course, we couldn't give a toss about them. I really hate that: it's their one day a year they really needed us. The rest, forget it." (02 December 1991 (Ö3) show.)

"I've been continuing to open my Christmas mail: my thanks to all of those people who've sent me Christmas cards. They're always most gratefully received, and get stuck up on the walls at home, and so on....Along with them, just as I was getting all sentimental and thinking, isn't it sweet the listeners really love me, is a little injunction to "please keep Hillingdon tidy". Well, I shall certainly do my bit there, no question about it." (25 December 1992 show.)

"Even on Christmas Day, he couldn't wait to get back to his records. At about 10 a.m., once everyone had opened their presents, he'd be in there again and the music would start up. Then we wouldn't see him until I called him for lunch." (Sheila Ravenscroft, Margrave, ibid., p. 377.)

"I rather dislike Christmas parties myself, to be honest with you: I always seem to end up in the kitchen talking with a bunch of people that I don't know about loft insulation. Perhaps I'm going to the wrong parties." (24 December 1992 show.)

"Christmas is a period that I don't particularly enjoy, mainly because there's an awful lot of extra work for me so that other people can have time off. I mean, that sounds rather ungrateful, and clearly I'm quite pleased to be still doing the programmes and everything, but at the same time it's an exhausting month." (12 December 2001)