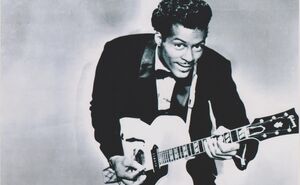 Charles Edward Anderson "Chuck" Berry (October 18, 1926 – March 18, 2017) was an American guitarist, singer and songwriter and one of the pioneers of rock and roll music. With songs such as "Maybellene" (1955), "Roll Over Beethoven" (1956), "Rock and Roll Music" (1957) and "Johnny B. Goode" (1958), Berry refined and developed rhythm and blues into the major elements that made rock and roll distinctive. Writing lyrics that focused on teen life and consumerism, and developing a music style that included guitar solos and showmanship, Berry was a major influence on subsequent rock music.

Born into a middle-class African-American family in St. Louis, Missouri, Berry had an interest in music from an early age and gave his first public performance at Sumner High School. While still a high school student he was convicted of armed robbery and was sent to a reformatory, where he was held from 1944 to 1947. After his release, Berry settled into married life and worked at an automobile assembly plant. By early 1953, influenced by the guitar riffs and showmanship techniques of the blues musician T-Bone Walker, Berry began performing with the Johnnie Johnson Trio. His break came when he travelled to Chicago in May 1955 and met Muddy Waters, who suggested he contact Leonard Chess, of Chess Records. With Chess he recorded "Maybellene"—Berry's adaptation of the country song "Ida Red"—which sold over a million copies, reaching number one on Billboard magazine's rhythm and blues chart. By the end of the 1950s, Berry was an established star with several hit records and film appearances and a lucrative touring career. He had also established his own St. Louis nightclub, Berry's Club Bandstand. But in January 1962, he was sentenced to three years in prison for offences under the Mann Act—he had transported a 14-year-old girl across state lines.

After his release in 1963 after serving 20 months of the three years, Berry had more hits in the mid-1960s, including "No Particular Place to Go", "You Never Can Tell", and "Nadine". By the mid-1970s, he was more in demand as a live performer, playing his past hits with local backup bands of variable quality. In 1979 he served 120 days in prison for tax evasion. Berry was among the first musicians to be inducted into the Rock and Roll Hall of Fame on its opening in 1986; he was cited for having "laid the groundwork for not only a rock and roll sound but a rock and roll stance." Berry is included in several of Rolling Stone magazine's "greatest of all time" lists; he was ranked fifth on its 2004 list of the 100 Greatest Artists of All Time. The Rock and Roll Hall of Fame's 500 Songs That Shaped Rock and Roll includes three of Berry's: "Johnny B. Goode", "Maybellene", and "Rock and Roll Music". Berry's "Johnny B. Goode" is the only rock-and-roll song included on the Voyager Golden Record.... (Read more)

In the late 1960s Chuck Berry received numerous write-ups in magazines such as Rolling Stone, portraying him as an inspirational figure for the Beatles and many of their contemporaries, as well as a "poet" of rock'n'roll. However, Peel paid little attention to the singer's recordings at that time, although he played some cover versions of Berry songs, notably by the Rolling Stones.

Given that great swathes of Peel's writings mentioned another rock icon, Elvis Presley, it seems a little odd that in his two books of writings Berry is mentioned only twice. In Margrave Of The Marshes [1], he refers to the disastrous second Buxton Festival (1969), where Peel was compere and Berry was booked to appear but didn't, resulting in widespread mud-slinging. In the same year, the re-formed Misunderstood supported Berry at the Albert Hall Pop Proms on 4 July, although it is not known whether Peel attended.

In Olivetti Chronicles [2], he claims that Chuck performs his hits live "in a perfunctory manner with a nervous pick-up band". (This was not an uncommon critical reaction to Berry's later performances, with some observers commenting that the singer's main concern was to ensure that he was paid for the gig.) Yet the man was never far from his playlists (particularly in 1972,chiming with the current vogue for rock 'n' roll revival), as can be seen below, and he praised the Electric Light Orchestra's cover of Roll Over Beethoven despite being annoyed at the number of covers that his work attracted.

Unsurprisingly, perhaps, Peel ignored Berry's biggest UK chart hit, the double entendre novelty song My Ding-a-Ling (recorded live in Coventry in 1972, with the audience joining in on the sing-along chorus) which few would count among the singer's best work (although it had been in his stage act from early in his career). However, an earlier UK chart entry, No Particular Place To Go made the Peelenium for 1964, and he seemed to share with Andy Kershaw an admiration for Promised Land. But perhaps the reason why Peel played relatively few Chuck Berry tracks was the one he gave in an interview with Wire(2) magazine in 1995;  "I must admit that although I love the Chuck Berry records, I can't separate out his rather unpleasant personal life from them. I keep thinking about some of his bizarre hobbies - alleged hobbies - when I'm listening to the records" [1]

Retrieved from "https://peel.fandom.com/wiki/Chuck_Berry?oldid=248207"
Community content is available under CC-BY-SA unless otherwise noted.