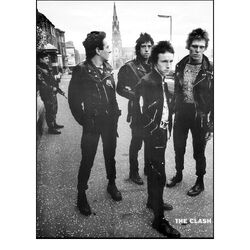 The Clash were a four-piece punk group from London, who formed in 1976, disbanded in 1986 and were a major influence on the scene throughout their career. The best-remembered line-up consisted of Joe Strummer (vocals, rhythm guitar): Mick Jones (vocals, lead guitar): Paul Simonon (vocals, bass guitar): and Nicky 'Topper' Headon (drums, percussion). An early member was drummer Terry Chimes (known as 'Tory Crimes' on the first LP). The band produced not only ground-breaking albums incorporating a wide variety of musical styles, but were also prolific singles-only artists. The concentration gained by the 7 inch format allowed them to produce tight, memorable songs that captured the era and their political stance effectively.

Peel played them throughout the most productive part of their musical life, and several tracks repeatedly appeared in the Festive Fifties. However, he was critical of their abandoned session (see below) and the attitude towards their record company, CBS, displayed by the single Complete Control, implying that they showed either naivety or ingratitude (Peeling Back The Years, 1987), and when they released "Straight To Hell" as a single in late 1982, he described it as "complete rubbish" after playing it on 06 October 1982 (BFBS). He discussed running into Joe Strummer on the 09 June 1987 show.

None. One attempt, scheduled for 24 April 1978, was abandoned. Peel noted in his diary the circumstances surrounding this: "They actually got as far as recording the backing tracks, but then they were so out of their heads they couldn't finish it, and decided the BBC's equipment wasn't good enough. It was one of those things where you thought: How do you argue with stupidity on this level? Not a very punk attitude, I thought." (Margrave Of The Marshes, Corgi Books, 2006, p. 368.) Peel repeats this version of events when answering a listener query on his show on 17 April 2001.

However, Ken Garner's The Peel Sessions contains an anecdote by Bill Aitken, the engineer on that date, which casts doubt on Peel's recollection. Aitken suggests that, when he inquired after Topper Headon's dog, the rest of the band made fun of Headon because of this. The session then became increasingly negative and was finally cancelled by the group (Garner, K., The Peel Sessions, BBC Books, 2007, p. 99)

In an interview for BBC6Music broadcast in October 2013 the three remaining members of The Clash - Mick Jones, Paul Simonon and Topper Headon recalled the session:

"It didn't work, so we just walked out and left it, it didn't sound any good," says Topper. "It was us, I'm sure," says Mick, magnanimously. "Speak for yourself," retorts Topper. "John Peel never forgave us. He liked all good new music, except for The Clash," chuckles Mick. ([1])

Obviously looking at the regular plays below (which is, of course, an incomplete listing) Mick is mistaken as Peel clearly had a soft spot for the band.

Retrieved from "https://peel.fandom.com/wiki/Clash?oldid=277372"
Community content is available under CC-BY-SA unless otherwise noted.