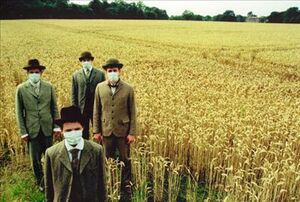 Clinic are an art-punk band from Liverpool, formed in 1997 from the band Pure Morning. Ade Blackburn and Hartley recruited Bryan Campbell (bass) and Carl Turney (drums) and began producing a unique brand of music which utilised a great deal of keyboard and primitive beats reminiscent of the Velvet Underground they said, "our tastes were completely different from what was going on around us at the time — the tail-end of the Britpop stuff, Oasis and all those bands. So I think it was inevitable that we were going to meet up and do something musical, just because our views on music were so different from what was going on." (PrefixMag.com)

The group constantly wear surgical masks during all photo shoots and performances, which they say are a tribute to masked bands such as Crime and the Residents. After a debut single on their own Aladdin's Cave Of Golf label, they signed to Domino Records in 1999: their first single for them, 'The Second Line', became well-known as the backing for a Levi Jeans advert. The following year, their first LP, Internal Wrangler, spawned two singles and led to tours with Radiohead and of the United States.

Since then, the band have released several albums that have taken their sound in different directions, and the most recent, Free Reign, aligned them with psychedelia. They have also used technology in unusual ways to promote their music: for instance, the single Free Not Free (2008) was a free download, and the latest LP was available as a glow in the dark frisbee with a download code for the tracks.

"A lot of the bands John Peel played would really struggle to get radio play now. Like a lot of things, once the old guard has gone, the move is to something more conservative – his tastes were so broad and unique – I’m not sure anyone could replace that." (Ade Blackburn) [1]

Kat's Karavan had already given significant airplay to Pure Morning via their singles and a Peel session in 1994, so it was natural (especially given their provenance) that John should take an interest in their new project. IPC Sub-Editors Dictate Our Youth received something approaching saturation airplay (with JP suggesting that he would have chosen it for his annual chart himself given the chance) and was the first of four tracks to make the Festive Fifty (the last, The Second Line, entered twice due to being available first as a single and then on the LP Internal Wrangler). Clinic recorded five sessions, the last live from Maida Vale, and made three live appearances. Ade Blackburn said his personal highlight was "recording a live gig at Maida Vale for the John Peel show. John Peel was the main thing I listened to growing up so that felt like our biggest achievement." [2] JP himself claimed that Clinic were "one of the best bands we have in this country." [3]

Retrieved from "https://peel.fandom.com/wiki/Clinic?oldid=235778"
Community content is available under CC-BY-SA unless otherwise noted.