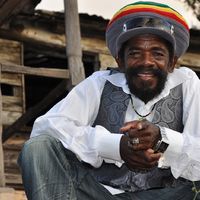 Calvin George Scott (born 3 September 1959), better known as Cocoa Tea, is a Jamaican reggae/dancehall singer, songwriter, and DJ. Born in Rocky Point, Clarendon Parish, Jamaica, he worked as a racehorse jockey and fisherman before settling on a musical career: he moved to Kingston in 1983 and adopted the stage name Cocoa Tea. AllMusic characterised him as "an early adopter of the 1980s dancehall genre who separated himself from his more aggressive peers with smooth, laid-back vocals."

Peel began airing Cocoa Tea's material from early on on his career. Tea later formed a supergroup with Home T and Shabba Ranks, the fruit of which, Holding On, received a number of plays from John. Cocoa also produced some anti-Iraq war tracks that Peel played during the Iraqi occupation of Kuwait and the time when the US coalition were contemplating bombing the country before the 2003 war.

Retrieved from "https://peel.fandom.com/wiki/Cocoa_Tea?oldid=238474"
Community content is available under CC-BY-SA unless otherwise noted.