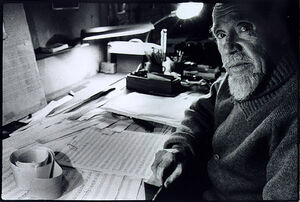 Conlon Nancarrow (1912-1997) was an American composer who lived much of his life in Mexico due to his refusal to renounce his Communist sympathies. He was a late discovery both by the musical world in general and by Peel in particular: much of his work is so difficult to play that he resorted to the use of player pianos to free himself from the necessity of taking account of human limitations. A dispassionate listening reveals that Nancarrow's early compositions sound like boogie-woogie played incredibly fast (an impression underlined by JP playing Camille Howard back to back with the Study 3E on 04 January 2000): in fact, he called the first five piano rolls The Boogie-Woogie Suite.

Apart from a Columbia set of LPs documenting his work to date in 1969, recordings of his music were thin on the ground until the specialist German avant-garde record company Wergo undertook the task of issuing the complete player-piano studies from 1977 onwards (and reissuing them on CD in the 1990s). On Peel's appearance on the Radio 3 programme Private Passions in 1996, presenter Michael Berkeley played him Study No. 21 from the fifty he wrote, which so astonished John that he vowed to play Nancarrow's music on Radio 1, a promise it took him four years to fulfill. Several of the studies found their way onto the show until JP seems to have lost interest. Another fan was Frank Zappa, who said, "The stuff is fantastic... You've got to hear it. It'll kill you."

Retrieved from "https://peel.fandom.com/wiki/Conlon_Nancarrow?oldid=105133"
Community content is available under CC-BY-SA unless otherwise noted.