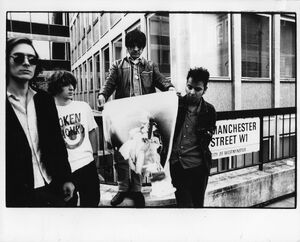 Cornershop are a British indie rock band best known for their 1998 UK number one single "Brimful of Asha". The band were formed in 1991 by Wolverhampton-born Tjinder Singh (singer, songwriter, and guitar), his brother Avtar Singh (bass guitar, vocals), David Chambers (drums) and Ben Ayres (guitar, keyboards, and tamboura), the first three having previously been members of Preston-based band General Havoc, who released one single (the "Fast Jaspal EP") in 1991. The band name originated from a stereotype referring to British Asians often owning corner shops. Their music is a fusion of Indian music, Britpop, and electronic dance music. Along with Cornershop, Tjinder Singh and Ben Ayres also had a side project called Clinton, where they produced electronic music.

Peel seemed to discover the band in 1992 and mentioned on 20 November 1992 that he saw them perform at the Falcon in London:

The band were regularly played on Peel's playlist, even when the band's hits dried out after 1998. Cornershop's side project Clinton were also played on his show. After Peel's death, the band recognised Peel contribution in helping the band to get exposure and attended his funeral in 2004.[1]