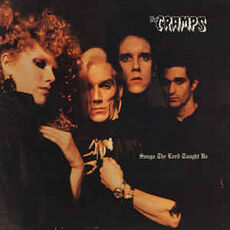 The Cramps were an American punk rock band, formed in 1976 and active until 2009. The band split after the death of lead singer Lux Interior. Their line-up rotated much over their existence, with the husband and wife duo of Interior and lead guitarist and occasional bass guitarist Poison Ivy the only permanent members. The addition of band members guitarist Bryan Gregory and drummer Pam Ballam comprised the first complete lineup in April 1976. They were part of the early CBGB punk rock movement that had emerged in New York. The Cramps are noted as influencing a number of musical styles: not only were they one of the first garage punk bands, they are also widely recognized as one of the prime innovators of psychobilly. (Read more at Wikipedia).

As a fan of garage punk rock, Peel would often play bands from that genre including The Cramps.

Peel also played tracks from the "Born Bad" LP series of "songs the Cramps taught us" - tracks that had been covered, performed or were otherwise associated with the band.

(The list below was compiled only from the database of this website and Lorcan's Tracklistings Archive. Please add more information if known.)

Retrieved from "https://peel.fandom.com/wiki/Cramps?oldid=240291"
Community content is available under CC-BY-SA unless otherwise noted.