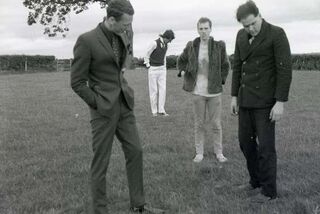 The Cravats are a neo-dadaist group from Redditch, UK, formed in 1977 after The Shend and Rob Dallaway saw the Stranglers in Birmingham. Guitarist Martin Seys and drummer Ethos Yapp left the band early. From there on, as a 4-piece, they managed to release six singles and two full albums (most of them on Small Wonder; some appeared in the indie charts Top 30), interspersed with some dada happenings. Between July 1979 and November 1982, they also recorded four sessions for Kat's Karavan. Their website relates:

John Peel Wingdings are now a thing of yore, I only remember hearing about them as a youth when Peel would announce on his show that he'd managed to play Teenage Kicks three times the previous night in Barnstable, or wherever the roadshow had landed. But it was on one of Peel's Wingdings in Stratford Upon Avon that The Shend gave Peel a copy of the 'Gordon' single resulting in the record getting played that night, and securing a session for his radio show. In July 79 The Cravats loaded up the van and travelled down to Maida Vale Studios in London and recorded five tracks for their first Peel session. (Jale Dowett) [1]

The unstinting support they received from Peel never translated into commercial success, and The Shend would later state that the P.R.S. payments they received for the sessions were the band's main income. On 29 May 1979, John played a T. Rex track as a request for him, and 11 September 1979, after dining with them, stated that they were hitch-hiking back to Redditch and begged listeners to give them a lift. "Ah, the romance, the glamour, the glory of being in a rock and roll band... The Shend is very big and looks menacing, but he isn't."

The Cravats formed the “DadaCravat Laboratories” (D.c.L), which enabled them to perform under many aliases: in these, their music appears more danceable. The classic line-up changes only on their final 12” release (Land Of The Giants, later to form the title of a compilation package) in 1985. The Shend went on to form the Very Things and DCL Locomotive, but has stated that the Cravats will exist forever and record when they feel they need to. In retrospect, their idiosyncratic sound seems to place them in the same league as other bands like 70 Gwen Party that JP alone liked: he once claimed, "The Cravats...are to Redditch what Robert Louis Stevenson was to Blackpool." [2], later declaring them to be "one of the most wonderful bands in the world." [3]


A reconstituted version of the band emerged in 2009, with new material appearing over the following years.

Note: The Shend acted as the compere for John Peel's 50th birthday celebration at London's Subterranea venue, broadcast on 30 August 1989.