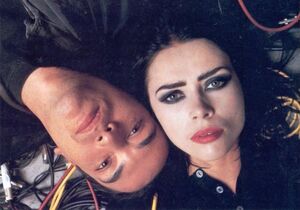 Curve were an English alternative rock/electronic duo from London, formed in 1990 and split in 2005. The band consisted of Toni Halliday (vocals, occasionally guitar) and Dean Garcia (bass, guitar, drums, programming). Halliday wrote also the lyrics of their songs and they both contributed to songwriting. An important collaborator was the producer Alan Moulder, who helped them to shape their blend of heavy beats and densely layered guitar tracks set against Halliday's vocals ... (read more at Wikipedia)

Between 1991 and 1993, Curve's music was regularly played by Peel, where the band did three sessions and had two 1991 Festive Fifty entries, which were broadcast in 1993.