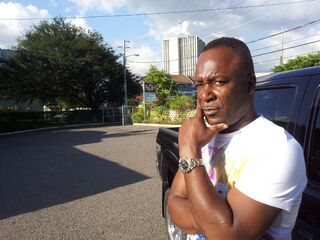 Philip Thomas, (born 12 February 1965), better known as Cutty Ranks, is a Jamaican reggae and dancehall artist. During the eighties, Ranks moved to the Arrows sound system and his debut single "Gunman Lyrics" was recorded for Winston Riley's Techniques label. He also recorded such tracks as "Out Of Hand" and "Fishman Lyrics" with Riley and after spending some time in Miami working with Super Cat and Nicodemus, he worked with Patrick Roberts' Shocking Vibes label, releasing the single "The Bomber". In 1990 he joined Donovan Germain's Penthouse label, enjoying a hit with "Pon Mi Nozzle". Ranks came to the attention of London-based Fashion Records, and in 1991 he released "The Stopper" and a debut album of the same name for Fashion, following this up with the album Lethal Weapon in the same year for Penthouse, featuring singers such as Marcia Griffiths, Dennis Brown, Wayne Wonder and Beres Hammond. His follow-up albums From Mi Heart and Six Million Ways to Die were released on Priority Records in 1996. (Read more at Wikipedia.)

The Cutty Ranks’ version of ‘Lambada’ with Wayne Wonder was a big favourite of Peel, who chose it as one of four tracks for the 1991 Peelenium. It was also used regularly by Peel in his own live shows (see 24 June 1999, 21 June 2001), although it did not appear on the 2002 FabricLive.07 compilation.

Retrieved from "https://peel.fandom.com/wiki/Cutty_Ranks?oldid=226940"
Community content is available under CC-BY-SA unless otherwise noted.