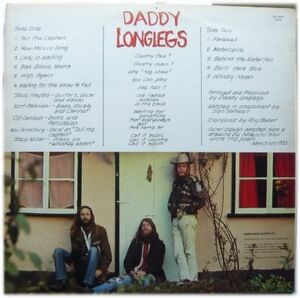 "Daddy Longlegs were four Americans, who because of the Vietnam War and the brutal draft, ended up in England in the dying months of the 1960s. The group comprising Steve Hayton, Moe Armstrong, Clif Carrison and Kurt Palomaki was fermented in the madness of Haight Ashbury, forged in the wilds of New Mexico and given life in the green fields of Castle Carey, Somerset.

"After a major fanfare in the British version of Rolling Stone magazine, they signed to Warner Bros and released their eponymous debut LP in the early summer of 1970 - a joyous brew of blues, country, and folk rock all filtered through the psychedelic funnel of the times. The LP arrived just as the British big sky bands were reaching their peak - a bunch of like minded groups, not so much related by blood but by their love of getting it together in the country, LSD and pot, and living the counter culture ideal. Influenced by the sounds of the Band, the Byrds, the Burritos, Cat Mother & the All Night News Boys and the Buffalo Springfield, they played a kind of hybrid backwoods music that was the perfect backdrop for the all the longhair outdoor gatherings that were happening across these fair isles in 70/71." (Read more at the Daddy Longlegs website)

If Peel began to turn away from the slicker progressive rock groups at the beginning of the 1970s, he still had plenty of sympathy for those bands which were closer to the ideals of the hippy underground - like the "fun, loose and anarchic" Daddy Longlegs. They did a session for Top Gear in early 1970, including a version of their anthem to dope-smoking, "High Again", which, when it was released as a single, was banned by the BBC for its drug references. Later, they appeared on two live Sunday concert shows. Daddy Longlegs split up in 1972, but John remembered the band with enough fondness to play a track by them on a 1997 BBC World Service show, alongside a track by a later act also called Daddy Long Legs, but with three words rather than two.

Retrieved from "https://peel.fandom.com/wiki/Daddy_Longlegs?oldid=192305"
Community content is available under CC-BY-SA unless otherwise noted.